Update Required To play the media you will need to either update your browser to a recent version or update your Flash plugin.
By Bryan Lynn
04 October, 2016


Facebook recently estimated that each of its users spends an average of 50 minutes a day on the company's online social network.

But the company wants to find ways to increase the time spent on Facebook and two other services, Instagram and Messenger.

A new product aimed at capturing our interest is called Facebook at Work.

Some businesses bar workers from using Facebook (openly) on the job. Now those individuals actually can use the service -- at least for work purposes.

Facebook at Work is separate from a users' personal Facebook. So people will need to sign up with the company for a new account. The idea, however, is exactly the same as Facebook – to connect as many users as possible, this time in the workplace.

Naturally, users can add and share comments, photographs, videos and information about the company and its offices. "A connected workplace is a more productive workplace," explains the official Facebook at Work page.

Facebook at Work was first announced about two years ago. Since then, the company has been testing the service with several large companies. 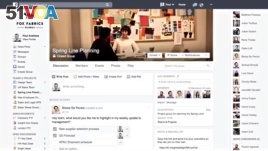 One of those businesses is the Royal Bank of Scotland. Its Director of Design, Kevin Hanley, told Business Insider the service has been helpful to the bank's 100,000 employees.

"I think Facebook lets us communicate, discuss and solve problems that other solutions, such as email, simply can't."

Hanley told the website that within his company, 90 percent of employees who tried Facebook at Work remained active from month to month.

Facebook at Work will be competing with other workplace products or services already in use. These include LinkedIn, Slack, HipChat, Microsoft's Yammer and Salesforce's Chatter.

According to the technology website TechCrunch, Facebook at Work will be launching in London on October 10. The site said it had seen invitations to the launch event that have been sent out.

Facebook has not yet confirmed a date for launching the service.

Bryan Lynn wrote this story for VOA Learning English, based on information from Facebook, and reports from TechCrunch and Business Insider. George Grow was the editor.

We want to hear from you. Would you like to use Facebook at Work in your workplace? Write to us in the Comments section, and visit 51VOA.COM.

network – n. group of people who know each other or work together