Update Required To play the media you will need to either update your browser to a recent version or update your Flash plugin.
By Bryan Lynn
04 April, 2018


Facebook has released a new tool that the company says will make it easier for users to evaluate news stories and publishers.

The changes to Facebook's News Feed were launched Tuesday for all users in the United States.

The social media service says the tool aims to provide "more context" for people to decide for themselves "what to read, trust and share."

The tool is based on research that identified the kinds of information that can be most helpful in deciding whether a news story is credible and trustworthy, Facebook said. It says users should have as much information as possible about publishers to help them recognize accurate news sources.

U.S. users can now click a button in News Feed that pulls up a window called "About This Article." In this window, Facebook provides more information about the news article and publisher. 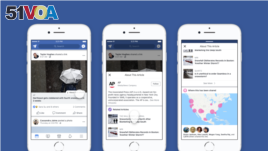 Facebook has launched a new tool for U.S. users that provides more information about news publishers appearing in the News Feed. (Facebook)

For example, a user can read basic information about the source of the article. People can also see whether the publisher is listed on Wikipedia. In addition, users can look at other recent stories posted by the publisher and can follow that company's Facebook page.

The tool shows users how many people shared the article on Facebook, and where they are. A user can also see which Facebook friends shared the story.

Facebook says the new features were designed with suggestions from "a diverse set of people and publishers." They included people from the company's Facebook Journalism Project. The project was created last year with the goal of strengthening ties between Facebook and news publishers.

The company also announced it was beginning a test with a group of Facebook users. People involved in the test will be able to click on the name of an article's author to get more information about them.

Facebook says it has been testing the News Feed changes in other countries and is considering international launches in the future.

The new tool is the latest in a series of moves by Facebook to answer its critics. Some people say the company has not done enough to stop misinformation from spreading on its service.

Founder Mark Zuckerberg has promised to take steps to prevent the spread of false news on Facebook. The company also found evidence that false Facebook accounts created in Russia and other nations were used to try to influence American voters in the 2016 election. Facebook says it has taken steps to limit these activities.

The most recent criticism of the company came last month, when Facebook admitted it made mistakes in dealing with the private information of its users. Zuckerberg apologized for the mistakes.

His apology came after news reports said a British research company was able to secretly collect private information on more than 50 million Facebook users. Zuckerberg said the company was continuing to investigate the incident.

Several U.S. lawmakers have expressed concern about Facebook's privacy policies. On Wednesday, the U.S. House Energy and Commerce Committee announced it had called Zuckerberg to appear before the committee on April 11 to discuss privacy issues.

evaluate – v. judge the value or condition of something

context – n. words used with a certain word or phrase to help explain the meaning

credible – adj. able to be believed

diverse – adj. including many different types