Update Required To play the media you will need to either update your browser to a recent version or update your Flash plugin.
By Dan Novak
30 August 2022


Some American states are dealing with teacher shortages by lowering the requirements to become public school teachers.

Education Week and the Education Commission of the States found that 12 states either recently changed or are considering changing rules surrounding teacher certification. In some states, a college degree is not even required to become a teacher. Others are considering making it easier to pass a teacher exam.

The cause and extent of the shortages in the United States are widely debated. But the National Education Association (NEA), an organization representing teachers, says that schools are facing a shortage of 300,000 teachers and school workers. And in a study of school officials released by Education Week last year, 40 percent said teacher shortages were either "very severe" or "severe." And the pandemic worsened the problem. 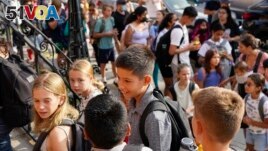 Students are lined up outside of the Adams' campus of Oyster Adams Bilingual School as they wait to check-in for the first day of school, Monday, Aug. 29, 2022 in Washington, DC. (Photo/Pablo Martinez Monsivais)

States are hoping that by making it easier to become a teacher, more people will enter the profession. But critics say the plans will put unprepared and unqualified teachers into classrooms.

Teacher certification is done on a statewide, rather than a national level. Requirements vary, but certification requires at least a college degree, and sometimes an advanced degree, like a master's or higher. It also requires completion of a state-approved teacher education program and the passage of a teacher exam.

In Florida, a law went into effect in July that permits military veterans without a college degree to earn teacher certification. They must have completed some college classes, but a degree is not required.

Florida Governor Ron DeSantis, a Republican, said in a statement that the law is a way to thank military families for their service.

"We ... know that our veterans have talents and skills that they can offer our students," he said. "This new opportunity expands Florida's existing programs that help our veterans take their talents to our schools, and it will help Florida remain a national leader in education."

In Arizona, a new law permits people to become teachers without college degrees as long as they are attending college and supervised by a certified teacher.

"There is an urgent need for teachers in Arizona," said Republican state Senator Rick Gray who introduced the bill. The law will "open the door to future educators and prepare them to be in the classroom."

But education experts say these new policies damage teaching as a profession and hurt students.

Jacqueline Rodriguez is a vice president at the American Association of Colleges for Teacher Education. She said in an interview with K-12 Dive that the Arizona law harms students by having an "unprepared person" lead the classroom. She added that those who are unprepared to teach will not be successful and less likely to stay in the position.

Christopher Morphew is head of the Johns Hopkins University School of Education in Baltimore, Maryland. He said teacher shortages could be addressed with better pay and working conditions for teachers.

A new study by the Economic Policy Institute (EPI) found that teaching earns far less than other professions that require similar college degrees. In 2021, teachers were paid 23.5 percent less than people with similar degrees, EPI found.

"Unless we're serious about providing competitive salaries for our educators, better working conditions, so that they can continue to grow ... we're going to constantly deal with shortage issues, especially in our areas that are harder to teach or where there are less candidates," he said.

certification — n. official approval to do something professionally or legally

extent — n. the range, distance, or space that is covered or affected by something or included in something

unqualified— adj. not having the skills, knowledge, or experience needed to do a particular job or activity

veteran — n. someone who fought in a war as a soldier, sailor, etc.

talent — n. a special ability that allows someone to do something well

supervise — v. to be in charge of ; to watch and direct

interview — n. a meeting at which people talk to each other in order to ask questions and get information

salary — n. an amount of money that an employee is paid each year