Update Required To play the media you will need to either update your browser to a recent version or update your Flash plugin.
By Mario Ritter
28 November, 2014

World oil prices have dropped by about 30 percent since June. That has helped many economies around the world. When people spend less on fuel, they can spend more on other goods. But lower oil prices also mean reduced profits for national oil companies. Privately-owned oil producers and companies that provide services to the oil industry are also affected.

Increased American oil production is one reason for the drop in world oil prices. Hydraulic fracturing technology developed in the U.S. has made that increase possible. Hydraulic fracturing, or fracking, is a process of pumping water and chemicals into the ground to force out natural gas and oil. It is often used to recover these fossil fuels from rock called shale. 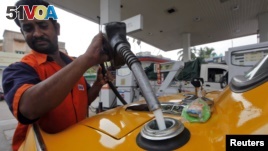 The Indian government has moved to reduce fuel subsidies as oil prices have gone down.

Jim Krane is an energy expert at the James Baker Institute for Public Policy at Rice University. He says oil produced from shale has changed the market.

"The shale production that is entering the market and pushing other sources of supply that used to come to the U.S. away from the U.S. and they are trying to find markets for that."

Mr. Krane says slowing economies in China and Europe have also reduced the demand for oil.

In the past, the Organization of Petroleum Exporting Countries would react to decreasing demand by cutting production. The twelve member states often cooperate to influence oil prices around the world. However, Jim Krane says members want to defend their share of the market and are unwilling to make production cuts.

"They are willing to see prices drop for a little while to see if they could sweat some of these higher-cost producers out of the market."

However, this could affect small oil producing companies in the U.S. These companies feel the effects of falling prices more sharply on their profit margin.

"If you are a small company thinking about investing in putting in some new oil production, well, you might think twice if prices are down at $75 (a barrel)..."

U.S. companies are not alone in feeling pressure from falling prices. Oil makes up 83 percent of Nigeria's exports and 70 percent of the nation's economy.

Finance minister Ngozi Okonjo-Iweala recently announced measures the government would take to increase income. These include new taxes on costly goods and a six percent cut in government spending.

India is increasingly dependent on oil imports. Lower oil prices have helped ease high inflation, which reached 10 percent last year. The government also has moved to cut back fuel price supports, or subsidies. The move has not affected the price people pay for fuel because of the sharp decrease in oil prices.

"If you look at the production that we get in the state of Texas, we are producing 4.5 million more barrels a month than we were doing this time last year. Yet the value of our production in Texas has dropped by over a billion dollars a month."

However, Mr. Jankowski believes the over-supply will slowly disappear.

"By 2016, we will probably see production drop again, definitely by 2017. By then we will see prices go back up again."

He says decreasing prices may make energy company leaders nervous, but most are prepared for it.

This report was based on a story by Greg Flakus and Kane Farabaugh with contributions from Anjana Pastricha and Chris Stein. Mario Ritter wrote it for Learning English. Caty Weaver was the editor.

cooperate - v. to act or work together

margin – n. the difference between the cost of buying or making something and the price at which it is sold

subsidies – n. money usually paid by a government to producers of a product to keep the price of the product low; price supports