Update Required To play the media you will need to either update your browser to a recent version or update your Flash plugin.
By Jim Dresbach
27 June, 2016


Iraqi forces recaptured the city of Fallujah from Islamic State fighters after a month of fighting. On Sunday, Iraqi Lieutenant General Abdul-Wahab al-Saadi called Fallujah "fully liberated." He also said the next step would be to retake Mosul.

The destruction in Fallujah is extensive. 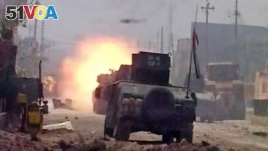 This image made from Associated Press video shows a tank during clashes in Fallujah, June 26, 2016.

Almost 85,000 people fled Fallujah and nearby areas to escape the fighting. Many of the displaced are without shelter. The summer temperatures are 45 degrees Celsius or higher.

Powerful sandstorms are also a danger.

Many citizens of Fallujah took shelter at a health center near the city. It is lacking water supplies and human waste systems. Center Director Ahmed Basel said, "We have too many people. There are no more spaces in the camps. Every five meters you find a family."

Women and children make up most of the population at refugee camps in Iraq. Males over the age of 14 were separated from their families as they fled Fallujah.

There are no clear reports of deaths and injuries on either side of the fighting.

Iraqi officials warned civilians against returning to their homes although conditions in the camps are bad. The officials said some parts of Fallujah are unsafe.

There is concern that similar problems of displacement will take place in a battle for Mosul.

Islamic State forces have occupied the city since June 2014. Its population is estimated at 2.5 million. Mosul is Iraq's second largest city.

Aid agencies are worried that more Iraqis will lose their homes. Close to 600,000 Mosul-area civilians may be displaced during the fight for the city.

Those agencies told VOA the displacement will be a disaster many times the size of the current situation outside Fallujah.

Iraqi Kurdish military commanders are saying that Mosul will be a more difficult fight than Fallujah. They say it will require a political-military agreement among all groups involved. For example, Kurdish commanders are warning against permitting Shi'ite militias to take part in the offensive in the Sunni majority area.

liberate – v. to free someone or something from being controlled by another person or group

displacement – n. the act of forcing people or animals to leave the area where they live