Don’t Be Fooled by ‘False Friends’ in English and Spanish

Update Required To play the media you will need to either update your browser to a recent version or update your Flash plugin.
By Bryan Lynn
10 April, 2018


An important part of language learning is trying to find the right words to communicate correctly in every situation.

This can be difficult for several reasons. Sometimes, a language may not have a comparable word with the exact meaning that you are looking for. Cultural differences and context also affect which words are right to use.

And sometimes the way a word looks can trick us. There is a term used to describe words in different languages that have the same spelling - or look very similar - but have completely different meanings. The term is "false friend."

Bryan Lynn: Today we will discuss some examples of false friends in English and Spanish. To do this, I have invited Alejandro Escalona, from Voice of America's Spanish service. Thanks so much for being here, Alejandro. 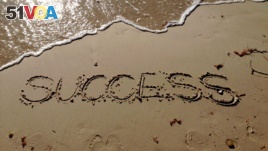 There are many examples in English-Spanish of 'false friends,' words that are spelled alike or look similar, but mean completely different things.

Alejandro Escalona: Bryan, a pleasure, thanks for having me today.

BL: As someone who speaks both English and Spanish, you must have had your own experiences with false friend words.

AE: Oh yeah, since I started learning English when I was a little boy in my country, Venezuela, in South America. You start learning of words that you don't even know. At least the way they are spelled, your tendency is to think that they mean the same thing, and they mean something totally different.

BL: Using false friends can of course lead to some very interesting situations. But it can also have funny or even embarrassing results.

BL: Can you think of some words that might have fooled you and could also trick other people?

BL: Okay, and the English word that is very similar is the adjective constipated.

AE: In English it means, you know, you can't go to the bathroom.

BL: Yes, and that could lead to all kinds of interesting misunderstandings.

AE: Oh, absolutely. In Spanish it's only that you have a cold.

BL: So that one would be considered a very common false friend mistake.

BL: Right, another example of a false friend word that can put someone in – and here's the word again – an embarrassing situation. Let's talk about some other ones. There's the English word bizarre, which, as an adjective, means very strange or unusual.

AE: It's used a lot in English, very often compared to Spanish. Because in Spanish, what it means, the word bizarre (bizarro) is someone who is valiant, or brave. But then in English, it's like so odd and so bizarre. Like remember that song - how bizarre...how bizarre.

BL: Let's take another one, the English word educated. As an adjective, it means having some kind of education. In Spanish, what is the word?

AE: When you say that someone is educado, means that he is a gentle person - with very good manners – like the description they used to use to describe Clark Kent (Superman).

BL: Here's an interesting one too, the word exit. In America, the word exit can be a verb – meaning the act of leaving a place. Or it can also be a noun to describe the opening used to leave a building. So a lot of times you will see the word exit on a sign.

AE: But the word exito in Spanish means success. So the words sound very much alike, exit and exito. When someone does something so remarkably well, he has a lot of success at whatever he's attempting to do. So he has success in his life, in his profession.

BL: So it must be difficult for some people to understand why they would see a sign with that meaning in a public place, such as a movie theater.

AE: When you go to a movie theater, oh, this is interesting. In the U.S., they wish you good luck whenever you leave the theater. So it's actually, oh exit, okay.

BL: Here's another one that is interesting – the English word library, which is a place where people go to borrow books and study.

AE: Oh, that's a classic, as well, library. In Spanish, we have libreria, that's like bookstore, where they sell books. And we have biblioteca, it's library in English.

BL: How about the English word salad. This is something you eat, usually made up of lettuce and other vegetables.

AE: The most similar word would be salado. Salado means that it's very salty. Also in Spain, when someone is either salado or salada – but this is only in Spain that I know of – it means that they have continuous episodes of bad luck.

AE: In Spain, yes. Oh, that guy or that person is salado, meaning oh, you really have it rough, my friend, you are salado.

BL: So not something you would want to order in a restaurant.

BL: Another example is the word sensible, an English adjective meaning to do something with good judgement.

AE: Sensible, the spelling is exactly the same. But in Spanish, when you say that someone is sensible, it's like he or she is very sensitive to something. For whatever reason, maybe a sentimental reason, or something that that person holds very dear to himself or herself.

BL: Let's also talk about the word actual. In English, this means real or existing in fact. The Spanish word is also spelled exactly the same.

AE: Actual in Spanish, what it means is present. It's actual, something that is in the present tense. Also, its... when you say that something is up-to-date, oh that's very actual.

BL: So actual is a very good example of a false friend because both words are spelled exactly the same, both are adjectives, but they have completely different meanings.

BL: So Alejandro, would you have any general tips for people trying to avoid false friends in language learning?

AE: The only way is to become exposed to these words as you learn them. Because you understand that even the same words mean different things in different Spanish-speaking countries.

BL: This can also be the case in different English-speaking countries, or even within the United States itself. Different areas use the same words, but they can have very different meanings.

AE: So it's very interesting. Language is like, it never stops. It's a cycle of things that are twirling in your head 24/7 until there's nothing else. Because language - at the end - is all you have. You're name, Bryan. Alejandro here, those are the things. Everything else you lose in life – material things, money, this and that – but what you learn, no one can take that away from you.

BL: Okay. Thank you again Alejandro for joining me today.

BL: Of course I hope the two of us will be more than just false friends.

AE: I certainly hope so.

BL: So maybe you can return to Learning English again in the future for another discussion.

AE: It will be my pleasure, Bryan, and thanks again for having me.

context – n. words that are used with a certain word or phrase to help explain its meaning

tendency – n. a quality that makes someone likely to think or behave in a particular way

embarrassing – adj. something causing someone to feel confused or foolish in front of other people

manners – n. polite ways of behaving with other people

twirl – v. to turn or spin around again and again