Update Required To play the media you will need to either update your browser to a recent version or update your Flash plugin.
By Gregory Stachel
16 July 2021


Taliban fighters are gaining control of many areas in northern Afghanistan causing families to flee.

The areas are home to many ethnic minorities. Thousands of families are crowding into camps because they fear living under the Taliban's rule.

Afghanistan's Refugee and Repatriations Ministry said, during a recent two-week period, 5,600 families fled their homes. Most were from the northern part of the country.

Outside the northern city of Mazar-e-Sharif is Camp Istiqlal where 50 families live in difficult conditions. The temperature can reach 44 degrees Celsius. And there is one bathroom, a hole in the ground, for the whole camp. 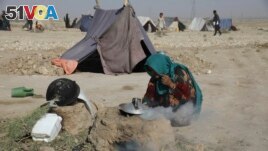 Many families told of how the Taliban took their towns and villages. Even after promises and negotiations, there is doubt that the Taliban will not repeat their severe rule of the past.

Yaqub Maradi fled his village when the Taliban arrived. He said they tried to intimidate villagers into staying. Maradi's brother and other family members were arrested and, "held hostage to stop them from leaving," he said.

Maradi continued, "Maybe he is released today, but he cannot leave."

The Taliban have enforced their own taxes in areas they control. Ashor Ali is a truck driver. He told The Associated Press he pays the Taliban $147, or half of what he makes, for each load of coal that he takes across the border of a province.

The group is promising Afghans, including minorities, that they have nothing to fear. Taliban negotiators are attending international conferences. They send their former ministers to Afghanistan from Qatar, where they have a political office. The Taliban's leadership council has its headquarters in Pakistan.

The group still requires Islamic rule. It said its methods and beliefs are less severe than before. But fleeing local people said it seems many Taliban commanders either have not gotten the message or are not listening.

In February 2020, the Taliban signed an agreement with the United States. It reportedly prevents the rebel group from capturing provincial capitals. But Kandahar in the south and Badghis in the north, are facing attack.

People in Afghanistan's capital Kabul also fear a Taliban attack. The Interior Ministry said this month that a rocket defense system has been built to protect the city. But the statement offered no details about where it came from or what it cost.

The United States, Russia, China and Pakistan have all warned the Taliban against trying to gain a military victory. They warn they will be international pariahs, or rejected by other countries.

Taliban leaders promised they are not doing this. But their negotiators boasted of their gains in recent meetings in Iran and Russia.

The group blames the Afghan government for not restarting talks aimed at including leaders from both sides of the conflict.

Suhail Shaheen is the Taliban's political spokesman and a member of its negotiation team. He told AP that he waited for a high-level delegation from Kabul to come to Doha for talks three times. They never came, he said.

Afghan officials who knew of the planned meetings confirmed they aimed to travel to Doha. But they said President Ashraf Ghani has been unwilling, often blocking efforts. The officials spoke to reporter on the condition that they remain unidentified.

Last week, U.S. President Joe Biden urged Afghanistan's leaders to find common ground. He said it was up to Afghans to bring an end to many years of war. Ninety percent of the U.S. and NATO military withdrawal has been completed and General Scott Miller has left his command.

Kathy Gannon reported this story for The Associated Press. Gregory Stachel adapted it for VOA Learning English. Mario Ritter, Jr. was the editor.

province –n. any one of the large parts that some countries are divided into

boast –v. to express too much pride in yourself for something you have done or are connected with