Update Required To play the media you will need to either update your browser to a recent version or update your Flash plugin.
By Dan Novak
10 June 2022


The major hit movie Top Gun was released in 1986. The film was based on a true story about fighter pilots in training and was published in a magazine three years earlier. Paramount Pictures bought the rights to the story written by Ehud Yonay and made the film to great success.

Now, the wife and son of Yonay are suing Paramount about its new movie, Top Gun: Maverick.

Shosh Yonay and Yuval Yonay brought the legal action to a California federal court Monday. They say that they control the rights to Ehud's story and that they became its owners again on January 24, 2020. 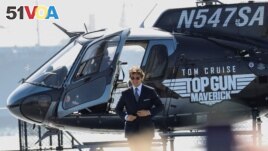 FILE - Tom Cruise arrives at the opening for the film Top Gun: Maverick on the USS Midway Museum in San Diego, California, U.S., May 4, 2022. (REUTERS/Mario Anzuoni)

The lawsuit accuses Paramount of releasing the new film without the rights to do so legally.

A spokesperson for Paramount Pictures said in a statement that the claims are without standing.

Yonay's story centered on "Yogi" and his friend "Possum" as they train to become pilots for the United States Navy. It was published in the May 1983 issue of California magazine. Soon after, Paramount Pictures bought the movie rights to the piece. Top Gun was released in 1986 and went on to become the top-selling film of the year.

Paramount answered the Yonays' order. The company said that the film had been mostly completed by January 24, 2020, and that it was not influenced by the magazine story. The Yonays argue that the new film would not have been developed without Ehud's story. And the lawsuit says that Top Gun: Maverick did not finish filming until May 2021, more than a year after the Yonay's recovered the property.

The Top Gun sequel has been in development for years. Production and release was delayed many times, most recently and extensively as a result of the pandemic. The film opened in theaters on May 27 and has spent two weeks as the top-selling movie. It has already made close to $560 million in theater admissions sales worldwide.

sue — v. to use a legal process by which you try to get a court of law to force a person, company, or organization that has treated you unfairly or hurt you in some way to give you something or to do something

lawsuit — n. a process by which a court of law makes a decision to end a disagreement between people or organizations