Update Required To play the media you will need to either update your browser to a recent version or update your Flash plugin.
By Bryan Lynn
02 February 2021


In a yearly American tradition, a famous groundhog has predicted there will be six more weeks of winter.

The animal, named Punxsutawney Phil, climbed out of his hole Tuesday morning in the town of Punxsutawney, Pennsylvania. A ceremony takes place each February 2 to mark the tradition, which is known as Groundhog Day.

If the groundhog can see his shadow, the tradition says, there will be six more weeks of winter. If the animal's shadow cannot be seen, Americans can expect an early spring.

A group of people from the local community lead the ceremony. They are known as Punxsutawney Phil's "inner circle." Members of the group said they woke the furry creature up at 7:25 a.m. 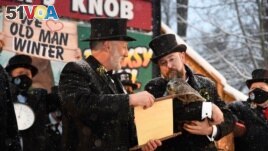 Shortly after this year's prediction became clear, one member of the inner circle shared a message to the public he said Phil had expressed earlier in the day. The message stated that after the longer expected winter, you can "(look) forward to one of the most beautiful and brightest springs you've ever seen."

Another member spoke about the unusual nature of the past year. He noted that people have been talking about life being similar to the subject of the 1993 film Groundhog Day. In the movie, a reporter visits Punxsutawney to cover the event, but becomes stuck in time. He then has to repeat the same day, over and over again, until he becomes a better person.

"It has felt like at times we're all living the same day over and over again," the member said. However, "Groundhog Day also shows us that the monotony ends - the cycle will be broken." He added that there would only be one Groundhog Day this year, and that a new day is "coming over the horizon."

The event, however, looked very different this year because of the coronavirus pandemic. While in the past thousands of people have traveled to Punxsutawney for the event, no crowds were permitted this year. The ceremony was held virtually.

A live broadcast of the activities -- which at times had up to 15,000 watchers -- played videos from past Groundhog Day celebrations ahead of this year's prediction.

When Punxsutawney Phil appeared, the president of the inner circle, Jeff Lundy, declared "you look beautiful." Another member then announced, "We have all passed through the darkness of night, but now see hope in morning's bright light. But now when I turn to see, there's a perfect shadow cast of me."

This year's prediction, like many years in the past, came as a major snowstorm hit the U.S. Northeast.

The tradition came to North America when German immigrants arrived in what is now the state of Pennsylvania. They chose the groundhog, a large rodent and member of the marmot family, as the animal to continue the tradition.

Groundhog Day in Pennsylvania dates back to 1886. In the event's history, groundhogs have predicted winter 106 times and spring 20 times, members of the inner circle say. Some years were lost because no records were kept.

Groundhog Day has become a part of American culture. Other states now hold their own celebrations with local groundhogs.

The Associated Press reported this story. Bryan Lynn adapted the report for Learning English. Hai Do was the editor.

monotony – n. a situation in which something stays the same and is therefore boring

cycle – n. a group of events that happen in a particular order and are often repeated

over the horizon – phr v. about to happen

cast – v. to send light or a shadow in a particular direction