Update Required To play the media you will need to either update your browser to a recent version or update your Flash plugin.
By Dan Friedell
17 May 2022


Even with a war going on in nearby Ukraine, movie stars and famous filmmakers are back in the southern French city of Cannes for the 75th anniversary of the film festival.

The 11-day event started on Tuesday and continues until May 28. It was canceled in 2020. And it was held last year in July under pandemic-related restrictions.

This year, the parties are back, and two big movies will be shown, one with Tom Cruise and another with Tom Hanks. 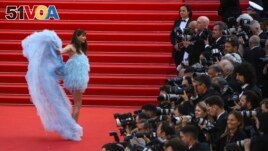 Frederique Bel poses for photographers upon arrival at the opening ceremony and the premiere of the film 'Final Cut' at the 75th international film festival, Cannes, southern France, Tuesday, May 17, 2022. (AP Photo/Dionisia Vasilopoulou)

Cruise is back in Cannes for the showing of his movie Top Gun Maverick based on the 1980s film, Top Gun. And Tom Hanks is in a movie about the life of singer Elvis Presley.

The Presley film was directed by Australian Baz Luhrmann, who is known for Romeo and Juliet and The Great Gatsby along with Moulin Rouge and Australia. And director David Cronenberg returns with Crimes of the Future starring Viggo Mortensen, Kristen Stewart and Lea Seydoux.

Scott Roxborough leads European coverage for The Hollywood Reporter. He called the group of films "one of the best Cannes lineups in years."

Another American actor and director, Forest Whitaker, will be in Cannes to receive one of the festival's top awards, known as the Palme D'or, for his life's work in the film business.

Festival director Thierry Fremaux told reporters, "It's tradition to have our American friends" in France. He noted that the Cannes Festival started as a partnership between France and Hollywood in 1939 but was delayed due to World War II. The first year of the festival was in 1946.

While China will not have films at the event, other Asian countries will be represented. Actor Lee Jung-jae, who became famous last year for his performance in Squid Game, is in a new film called Hunt. Filmmakers Park Chan-wook of South Korea and Hirokazu Kore-eda of Japan are also showing their new movies.

The festival opened on Tuesday with Final Cut, a movie about zombies. French filmmaker Michel Hazanavicius first called it Z like Z. But he changed the name because the letter Z is being used by Russian soldiers in the war in Ukraine.

Russian films were not permitted at the festival.

Two films with connections to Ukraine will be shown. One is called Mariupolis 2 by Lithuanian director Mantas Kvedaravicius. He was killed during the bombing of Mariupol by Russian forces almost one month ago while working on the movie. The other is Butterfly Vision by Ukrainian director Maksim Nakonechnyi. It is about a woman who comes home to Ukraine after being released in a prisoner exchange.

Fremaux, the festival director, said "we will never stop thinking about what is happening in Ukraine," even if the event is celebrating movies for a short time.

festival– n. an organized series of performances over a short period of time

lineup – n. a sequence of events or performances

zombie – n. a made up being that can move even after being dead often mentioned in scary books and movies