Update Required To play the media you will need to either update your browser to a recent version or update your Flash plugin.
By Dan Friedell
14 June 2022


Jumbo Floating Restaurant on Aberdeen Harbor in Hong Kong was towed away on Tuesday after being closed by the pandemic. The owners of the famed eating place could not find investors to reopen the historic site.

Jumbo Floating Restaurant opened in 1976 and served Cantonese food and seafood like slow-cooked baby pig and lobster. More than 30 million people ate there over the years.

Some of the restaurant's famous visitors were Queen Elizabeth and movie star Tom Cruise. 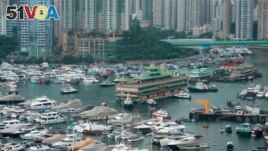 The business owner, Aberdeen Restaurant Enterprises, said it became too costly to keep the property in good condition while it was closed. The floating restaurant required millions of dollars each year in maintenance and inspection costs.

On Tuesday, several small boats pulled the restaurant away from its place in the harbor. Officials did not say where the property was going.

"We do not foresee that it can resume business in the immediate future," the company said.

Some area lawmakers called for the government to step in and buy the restaurant. Hong Kong Chief Executive Carrie Lam rejected the idea. Lam said the government was "not good" at running a business like a restaurant.

Some Hong Kong residents expressed regret at the loss of the restaurant.

Wong Chi-wah operates a boat in the harbor. He talked about the old days of Jumbo Kingdom and said many Japanese visitors would come.

"The streets were full of parked vehicles as visitors arrived in big groups," he said.

"If the restaurant leaves today, there is definitely a sense of loss, not just for people who live around this area but for the whole of Hong Kong," said Sin.

Sin said he has been to many places in the world to take photographs.

"Where else in the world are there such floating restaurants?" Sin asked. "I don't think there are any left."

tow– v. to hook a rope or attachment to something and pull it away

maintenance – n. the act of fixing or repairing something on a regular period of time

foresee– v. to look into the future

resume– v. to start something again after stopping

resident– n. a person who lives in a place or city

park – v. to stop and leave a car on the side of a road