Fans Banned at Olympics, Tokyo Under State of Emergency

Update Required To play the media you will need to either update your browser to a recent version or update your Flash plugin.
By Jonathan Evans
08 July 2021


Tokyo Governor Yuriko Koike said Thursday that spectators are banned from the Tokyo Olympics set to open in two weeks.

Koike announced the ban after meeting with International Olympic Committee and Japanese organizers.

Suga said the state of emergency would go in effect on Monday and last through August 22. This means the Olympics, to be held July 23 through August 8, will operate under emergency measures.

"In order to prevent the resurgence of infections from spreading across the country, we need to step up virus prevention measures," Suga said. 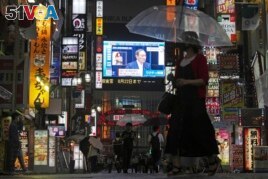 Pedestrians walk past a giant public TV with a live broadcast of a news conference by Japanese Prime Minister Yoshihide Suga after he announced a state of emergency because of rising coronavirus infections Thursday, July 8, 2021, in Tokyo.

Experts warned of the possibility of increased infections during the games at a meeting of government advisers. They estimate cases could increase to more than 1,000 a day, which would severely affect health care systems.

Ryuji Wakita is director-general of Japan's National Institute of Infectious Diseases and the head of a government COVID-19 advisory group. He urged stronger border controls to find and separate infected persons arriving at airports to prevent infections from spreading outside of Tokyo.

One member of the Ugandan Olympic team tested positive upon arrival June 19 at Narita International Airport. The athlete was then separated from others. The eight other team members were permitted to travel more than 500 kilometers on a bus to their pre-Olympics camp in Osaka.

Days later, a second Ugandan team member tested positive for the virus. Seven town officials and drivers who had close contact with the team were forced to quarantine themselves as a result. Health officials said both infected Ugandans had the delta variant, a more infectious version of the coronavirus.

On Saturday, a Serbian Olympic team member also tested positive. The government confirmed that four other Olympians tested positive after entering the country earlier this year.

"There will be more people coming in. ... We should use this as a lesson so that similar problems won't be repeated elsewhere in Japan," said Osaka governor Hirofumi Yoshimura. He spoke at a recent area governors' meeting where leaders approved an urgent request for stronger border controls.

Under newly defined health measures, airport officials will isolate an entire group if any member tests positive. They will also stay at separate housing areas until the Olympic village opens July 12. Towns holding Olympic events can request that guests stop training and quarantine themselves until they are cleared by medical tests.

In Tokyo, infections are spreading among children and young adults who are largely unvaccinated. Experts say 26 percent of older adults are now fully vaccinated.

The U.S. Centers for Disease Control and Prevention and Our World in Data report that 13.8 percent of people in Japan are fully vaccinated. That is slightly above the world average of 11.3 percent. But it is low compared with 47.4 percent in the United States and 49.5 percent in Britain.

On June 21, Japan eased its third state of emergency to less severe measures. Those measures centered on shorter operating hours at drinking places and restaurants in Tokyo and other areas until July 11.

positive - n. the result from a test that shows that a particular germ, condition, or substance is present

spectator - n. a person who watches an event, show, game, activity, etc., often as part of an audience