Update Required To play the media you will need to either update your browser to a recent version or update your Flash plugin.
By Dr. Jill Robbins
01 February, 2017

February 1 is Harry Styles' 23rd birthday. And the hashtag #HappyBirthdayHarry is trending around the world.

Fans of Harry Styles have also donated $11,849 to support the oldest gay and lesbian telephone help line in the United Kingdom.

Styles' fans in the UK and the US have sponsored birthday charity efforts for several years. The 1D Fans Give group raised $24,671 for the Switchboard hot line last year. The group also sells clothing with images of hearts made up of words from One Direction's songs and rainbows to raise money for the charity. The singers themselves have held charity dances and in 2016, pledged to donate £200,000 from their concert ticket sales to the charity Stand Up To Cancer.

Styles started singing in a band called White Eskimo while he was in secondary school. At 16, he sang on the television talent show, The X Factor. The show's producers then asked Styles to be the lead singer for a new band - One Direction.

The band's first album was a best seller and through social media the group found international success. They won a large number of music awards, such as Artist of the Year and Top New Artist. By June 2015, the business magazine Forbes said the group had earned $130 million for the previous year. They ranked One Direction as the fourth highest earning performers in the world.

The band has not kept all that money to themselves. They support a number of humanitarian causes, including the Alzheimer's Association, Comic Relief, Greenpeace, and the Global Poverty Project. 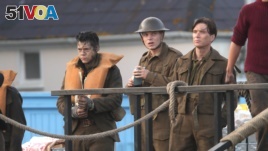 Now, Styles is trying out a new career - acting. He plays a role in the movie Dunkirk. The movie tells the story of Allied soldiers who were rescued from the German army on a beach at Dunkirk, France. The movie will come out in July 2017.

hot line – n. a telephone service for the public to use to get help in emergencies

Allied - adj. of or relating to the nations that fought together against Germany in World War I and World War II

We want to hear from you. Do you like the One Direction band? What do you think of Harry Styles? Write to us in the Comments Section.