Update Required To play the media you will need to either update your browser to a recent version or update your Flash plugin.
By Anna Matteo
07 April, 2018


Now, it is time for Words and Their Stories from VOA Learning English.

Each week, we look at common words and expressions in the English language. Sometimes we explore their roots. How did they find their way into English? Sometimes we simply explain how we use the words in our everyday lives.

Today we will do both!

In honor of farmers around the world, we will explore the roots of the word "farm." We will also give several expressions that come from farming. 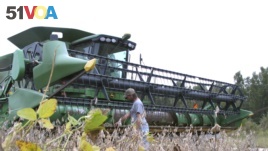 A farmer checks his combine as he gets ready to harvest his soybean crop at his farm in South Carolina 2016. (File Photo)

Now, you probably know that "farm" is a noun and a verb. "Farmers farm farms." may not be the best sentence, but it is correct.

Many years ago, the job of a farmer was not always growing crops. The website Merriam-Webster.com notes that in the late Middle Ages, it was common to pay a fixed amount of money for use of land to grow crops. "The sum of money to be paid was called ferme," — or, in Modern English, farm.

So, part of the job of a medieval farmer was to serve as a debt collector.

Around the early 16th century, the word "farm" was used to mean the land held on lease for agricultural purposes. A short time later, "farm" simply meant any land used for raising crops. By the end of that century, "farmer" simply meant a person who raises crops and cultivates land.

The work of a farmer is mainly outdoors. So, the weather can influence whether or not a crop is successful.

Farmers know how to make use of good weather conditions when they have them. In other words, they know how to make hay when the sun shines. This expression may date back to the early 1500s. It comes from the fact that the best time to cut the grass is in dry, sunny weather.

But we can all use this expressions.

It means to take advantage of good, favorable conditions. Another way to explain it is to make the most of an opportunity when it is available.

For example, with her husband was away on business, the woman decided to make hay while the sun shone. She did all the things around the house and the property that she could not do when her husband was home.

A common expression in use today, to farm out, is actually very old. It comes from the old tradition of leasing land to a tenant farmer and letting the landowner collect the payments.

We continue to use the word "farm" in this way.

If you farm something out, you find other people to do the work for you. For example, if a company is unable to complete all of its projects, it can farm out some of the work to other people. These temporary workers are often called subcontractors. Every industry has some work that it farms out to other people.

Now, let's go back to "farm" meaning a place where food is grown.

Farmers begin by planting seeds in the ground.

In American English, however, seed money is not the money you spend on the seeds to be planted on your land. "Seed money" is the money you use to invest in a project or business. It is the money that helps to grow an idea.

On the other hand, when something goes to seed, it is in poor condition because of a lack of care. If you keep up with something, it will not go to seed.

Let's hear how this expression can be used.

A: Have you seen Joan recently?

A: I was at her house yesterday and she has really let it go to seed. Two windows are broken, her bathroom sink isn't working and some of the house paint is coming off.

B: She has been really busy working. She probably doesn't have time to keep up with the house.

A: Let's get friends together and help her out.

Now, there are a few "farm" expressions that you probably should avoid.

For example, some Americans used to call a place where people go to lose weight a fat farm. Today, we call them health resorts or wellness centers.

A funny farm is another inappropriate term. It means a mental hospital.

Finally, if someone bought the farm, it means he or she has died. But this is not a respectful way to share news of a person's death.

But we will leave you with a "farm" expression that is still fine to use.

If you bet the farm, you risk everything you have on an idea or project that you think will be successful. We can also use this as a way of saying that we are very sure about something, as in this example:

A: Did you hear about Madison?

A: She's planning on opening a coffee shop.

B: Do you really think she will?

A: I'd bet the farm on it. When Madison says she's going to do something, she does it!

And that's the end of Words and Their Stories. But we'll be back next week with a new one. You can bet the farm on it!

Anna Matteo wrote this story for VOA Learning English. George Grow was the editor. The song at the end is Ella Fitzgerald singing "Old MacDonald Had a Farm."

medieval – adj. of, relating to, or characteristic of the Middle Ages

lease – n. a legal agreement that lets someone use a car, house, etc., for a period of time in return for payment

subcontractor – n. to hire another person or company to do part of a job that you have been hired to do

resort – n. a place where people go for vacations or relaxation