Update Required To play the media you will need to either update your browser to a recent version or update your Flash plugin.
By Christopher Jones-Cruise
10 September, 2017

As a candidate for president, Donald Trump called for talks on reworking the 1994 agreement, known as NAFTA.

One result of NAFTA was an increase in agricultural exports from the United States. So American farmers are worried that any changes to the trade deal could hurt them financially.

Ken Beck is a farmer in the state of Illinois. He says it is not easy to grow crops now.

"Risky at best. There is no money in this game anymore."

Beck says his farm has been losing money in each of the past four years. He says corn and soy prices have dropped, while costs for fertilizer and seed are rising. He believes that the U.S. government can help him and other farmers by increasing trade.

His hopes for increased demand, and higher crop prices, ended when the Trump administration decided to withdraw from the Trans Pacific Partnership, or TPP agreement. That is why Beck is closely watching the U.S. efforts to renegotiate NAFTA.

The United States is one of the top suppliers of agricultural products to Mexico. The U.S. exported more than $2.5 billion in corn to its southern neighbor in 2016. But this year there has been a decrease in Mexican imports of U.S. corn and soybean. Beck says that is because Mexico is buying crops from other countries. 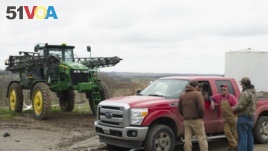 FILE - In this April 4, 2017, photo, Blake Hurst, a corn and soybean farmer and president of the Missouri Farm Bureau, second right, talks with his son Dallas Hurst, right, and his brothers Brooks Hurst, left, and Kevin Hurst, second left, on his farm in

"Mexico, for the first time in history, bought corn from Argentina. Was it cheaper? No. But they are sending a signal."

Other signs that worry Beck are coming from President Trump, including his threat to withdraw from NAFTA. Beck says this creates uncertainty for American farmers.

Tamara Nelsen works for the Illinois Farm Bureau, a non-profit group working for the state's farmers.

"If you have a shock -- like pulling out of TPP or not keeping the agreement going on NAFTA, it makes the markets nervous and it lowers the farmers' farm income."

Nelsen says many farmers are worried.

"We hope that some of the rhetoric, like anti-trade, anti-exports for agriculture, will turn around and we'll actually have some achievements."

Farmer Ken Beck says he hopes only small changes will be made to NAFTA. And he says he hopes that whatever changes are made take place soon.

"Decisions in the next few weeks are going to have to be made for next year already."

game – n. a physical or mental activity; a field of gainful activity

cheaper – adj. costing less; not costing a lot of money

uncertainty – n. the state of being unsure; something that is unknown

rhetoric – n. the art of speaking or writing effectively

achievement – n. a result gained by work or effort