Update Required To play the media you will need to either update your browser to a recent version or update your Flash plugin.
By Christopher Cruise
21 February, 2015


Many areas of cropland in Bangladesh are becoming unfit for farming. The land is becoming salty. It is a big problem for the small country. More than 155 million people live in Bangladesh. Growing crops is the most common way Bangladeshis support themselves.

Farmers in the country are learning to grow vegetables in so-called "vertical gardens." The soil in these gardens is better because heavy rains have removed much of the salt.

The village of Chandipur is in southwestern Bangladesh. Pumpkins and other gourds grow on vines on top of small homes. The vegetables get the food they need from soil placed in containers on the ground. 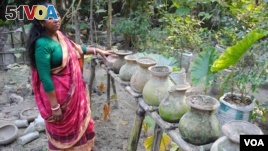 A woman in Chandipur village in southwest Bangladesh shows the pumpkins she grew in her "vertical garden." (Photo: A. Yee for VOA)

Shobitha Debna is a 35-year-old farmer in the village. Her garden space is very small. But she is able to grow hundreds of kilograms of vegetables each season.

She says she grows gourds, including pumpkin, as well as green beans, red amaranth, beets, carrots, cauliflower and more.

Ms. Debna depends on the vegetables to earn money. She makes a few dollars a day.

This kind of farming is new in Chandipur. But it may spread across the country.

Most of Bangladesh is at or below sea level. Rising seawaters linked to climate change has severely affected the country. High water from storms in coastal areas also add salt to soil. High salt content makes crops less productive.

The flow of seawater from storms like Cyclone Aila in 2009 damage much of the soil in farm areas. The salty water flows into rivers, which then flood Chandipur and other villages. Vegetable crops fail. For three years now, hundreds of villagers have grown crops in vertical gardens. The international non-profit group WorldFish Center brought vertical gardens to Bangladesh.

Dr. Craig Meisner is the South Asia country director for WorldFish Center. He told VOA, "there is no country with such population density where natural resources are stretched to their very limits."

He says if climate change adaptation fails in Bangladesh, it is sure to fail in many other countries. However, he says, if it succeeds "it gives hope for the world's future."

From July to October, about 1.5 meters of rain falls in Bangladesh. The seasonal rains remove salt from the soil. At the end of the rainy season, villagers collect the cleaned soil and place it in large containers. They use that soil to grow vegetables.

WorldFish Center has trained about 200 villagers in southwestern Bangladesh to make vertical gardens. Over the next two years, the center will train about 5,000 people.

There are some people who are not part of the WorldFish Center program. But they are still using vertical gardens. They made them after seeing their neighbors' designs.

Nurun Nabi is a program officer at WorldFish Center. He says two farmers stopped him last year on a village road to talk about the vertical gardens. He said they demanded to be part of the training group.

A vertical garden is easy to make. Villagers fill containers with good soil and natural fertilizers. They put the containers on bricks so they are off the ground. They add pieces of the bricks to the soil to help water flow and drain.

Villagers also grow vegetables in containers made from large, thin pieces of plastic supported by bamboo. This "vertical tower" measures more than a meter wide. Each of these towers can produce more than 100 kilograms of vegetables. It costs about $12-$13 to build.

salty – adj. containing salt or too much salt

vertical – adj. positioned up and down rather than from side to side; going straight up

adaptation – n. a change in a plant, animal or climate that makes it better to live or survive in a particular place or situation

brick – n. a small, hard block of baked clay that is used to build structures (such as houses) and sometimes to make streets and paths

drain – v. to remove (liquid) from something by letting it flow away or out

What challenges do farmers in your country face? And how are they dealing with them? We want to hear from you. Write your thoughts in the comments section.