Update Required To play the media you will need to either update your browser to a recent version or update your Flash plugin.
By Jonathan Evans
18 July 2021


Scientists in California report the first appearance of a species of bright green algae, caulerpa prolifera, growing in the ocean near California. And the researchers say they hope to never see it again.

The growth of caulerpa prolifera was found close to the coast off the Southern California town of Newport Beach. Divers recently began to remove the algae, as it could greatly harm the area's environment. Few fish or other animals eat caulerpa prolifera. So it spreads effectively. It can quickly take control of an ecosystem, forcing out other plants as well as the animals that eat them.

So far, the growth covers about 90-square-meters. However, tiny pieces of the algae can easily break off and continue to grow elsewhere.

Robert Mooney is a biologist with Marine Taxonomic Services. He led a team of three divers at the site.

He told the Associated Press that the team has a chance to fully remove the plant but no time can be wasted.

"We don't have the luxury of waiting to see what happens," he said.

The species was discovered late last year. Federal, state and local officials were urged to act earlier this year to prevent the algae from spreading. It was important to act quickly, they said, because the movement of swimmers and boaters in the sea help spread the algae. 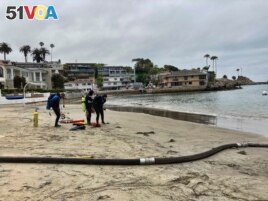 Divers, who are part of a team removing algae, get ready to enter the harbor to help suction and filter out algae in Newport Beach, Calif., Wednesday, July 7, 2021. (AP Photo/Amy Taxin)

California faced a similar problem two years ago. A related algae was found off the coast of Huntington Beach and Carlsbad. It cost $7 million to remove. California then banned the sale of that algae and others.

Caulerpa prolifera is used in some aquariums and is not banned in California. When people clean aquariums, the resulting wastewater can include extremely small pieces of the algae. These pieces will travel along waterways into the Pacific Ocean and begin to reproduce.

The source of Newport Beach's algae invasion is not confirmed. But Keith Merkel, a biological consultant on the project, has a suspicion.

"It's more than likely the source is an aquarium release," he said.

So far, divers have not discovered the algae anywhere else in the area. But, Merkel said testing will continue and if more algae is found, another removal operation will begin.

"There's a good chance that it has spread, we just don't know where — which is the biggest fear that we have," Merkel said.

aquarium – n. a glass or plastic container in which fish and other water animals and plants can live

luxury – n. something desirable but expensive or hard to get