Update Required To play the media you will need to either update your browser to a recent version or update your Flash plugin.
By VOA
06 July, 2015


A new report says Internet speeds around the world are getting much faster. The report comes from Akamai, a business that provides cloud computing services. But it warns that the sharp increase in the number of devices connected to the World Wide Web could cause problems. The company says this increase might use up all of the remaining space that is currently available on the Internet.

The report is called "State of the Internet." It examines use of the World Wide Web, Internet and mobile device data speeds, and overall strength of the web.

Akamai releases a new version of the report every three months, at the end of each financial quarter. David Belson is the company's senior director of industry and data intelligence. 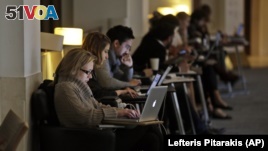 In this photo taken Wednesday, April 3, 2013, people work on their computers at the British Library in London.

"The changes this quarter were overwhelmingly positive," he said. "[G]iven that this report tracks the same trends we've been seeing for a while, I think that's a very positive sign."

The report says Internet connectivity continues to grow in every part of the world. The total number of Internet users has reached nearly 3.2 billion. There are almost two connected devices for every person on the planet. The report predicts that number will increase to three devices per person by 2019.

South Korea set a new record with an average speed of 23.6 megabits. Ireland, Hong Kong, Sweden and the Netherlands were among the top five areas with the fastest connections. However, less than five percent of the world's population has access, or use, of Internet speeds of 25 megabits or higher.

The United States still leads the world in the number of unique, or different, Internet addresses.

The report says the growth in the number of connected devices is adding to a new problem: the need for more addresses.

Most of the World Wide Web uses Internet Protocol version 4 to govern data traffic. IPv4 has a total of 4.29 billion unique addresses for computers, computer tablets and other electronic devices to connect and direct traffic.

But billions of addresses are already being used. Experts use the term "Internet of Things" for all the physical objects that are able to connect to the Internet. Researchers are warning that as the "Internet of Things" grows, IPv4 will not have enough room in the near future.

"The IPv4 exhaustion issue has been around for many years," Mr. Belson told VOA. "Now it's really becoming more and more imminent."

There is a new version of the web, called IPv6. It has been available for more than 10 years. The problem, Mr. Belson said, is that Internet service providers do not see IPv4 exhaustion as an immediate threat. If they did, they would change to the new system.

VOA's Doug Bernard reported on this story for VOA news. Pete Musto adapted it for Learning English. George Grow was the editor.

cloud computing – n. the use of the Internet instead of a physical computer to store, manage and process electronic data

quarter – n. a period of three months in a row, such as April through June

exhaustion – n. the act of using all of something

Now it's your turn. Do you have access to fast Internet speeds in your country? How many devices does the average person own? Let us know in the comments section.