Update Required To play the media you will need to either update your browser to a recent version or update your Flash plugin.
By Bryan Lynn
11 November 2021


Scientist Sergey Zimov has long studied the frozen ground, or permafrost, in one of Earth's coldest places, about 130 kilometers south of Russia's Arctic coast. It has been melting fast as planet temperatures increase.

Now Zimov is warning about the thawing of all the materials that permafrost has kept trapped since prehistoric times. He says those materials will release huge amounts of harmful greenhouse gasses. These are the heat trapping gasses blamed for the warming planet.

The 66-year-old has studied permafrost from his scientific base in the Yakutia area for many years. Recently, he was able to easily drive a thin metal pole meters deep into the Siberian ground. The area has seen temperatures rise more than three times the world average. 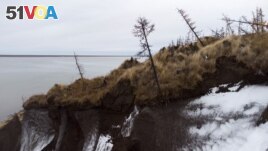 "This is one of the coldest places on earth and there is no permafrost," Zimov told Reuters news agency. "Methane has never increased in the atmosphere at the speed it is today...I think this is linked to our permafrost."

Permafrost covers 65 percent of Russia's landmass and about a quarter of the northern landmass. Scientists say gas releases, or emissions, from its thaw could one day equal or even overtake the amount of industrial emissions produced by the European Union.

Emissions from permafrost, however, are seen as natural, and therefore not included in international agreements aimed at limiting such pollution.

During the COVID-19 crisis, the amount of methane and carbon dioxide (CO2) in the atmosphere was increasing at a faster rate than before. Yet, industrial production and transportation activity worldwide dropped substantially during the same period.

Scientists say whole cities sit on permafrost and its thawing could cost Russia $100 billion in damage by 2050 if the warming rate continues.

Zimov wants to slow the thaw in one area of Yakutia by populating a protected area called Pleistocene Park with large plant-eating animals including bison, horses and camels. Such animals pack down the snow, making it more dense and less able to absorb heat.

Zimov and his son Nikita began to bring animals to Pleistocene Park in 1996. So far, about 200 kinds are deployed in the area. The scientists say the permafrost at the park is colder than that in other areas.

Zimov would also like to include mammoths in his natural method for engineering a cooler environment. The elephant ancestors disappeared from Earth thousands of years ago, but scientists have expressed hope for their recreation through genetic methods. Including the animals would help recreate the ecological system of the last Ice Age, which ended almost 12,000 years ago.

Zimov and his son were co-writers of a study published in Nature's Scientific Reports last year. The study showed that the animals in Pleistocene Park had reduced the average snow depth by half. In addition, the average yearly soil temperature fell by 1.9 degrees Celsius, with an even bigger drop during winter and spring.

Researchers say more work is needed to confirm whether such untraditional methods might be an effective way to fight the effects of climate change on permafrost. However, models described in the study suggest adding large animals into the Arctic environment could stop the thaw of as much as 37 percent of permafrost.

Reuters reported on this story. Bryan Lynn adapted the report for VOA Learning English. Caty Weaver was the editor.

thaw – v. to go from a frozen to a liquid state

decay – v. to become weak or destroyed over time, often because of natural causes like bacteria or age