FBI Director Accused of Interfering in US Election

Update Required To play the media you will need to either update your browser to a recent version or update your Flash plugin.
By Bryan Lynn
03 November, 2016


Some Americans are criticizing the Federal Bureau of Investigation (FBI) for possibly influencing the U.S. presidential election.

The criticism started last Friday after the bureau's director, James Comey, sent a letter to Congress. The letter said the FBI was reopening an investigation of former Secretary of State Hillary Clinton's emails.

The emails were written before she became the Democratic Party's candidate for president.

Comey told Congress that the FBI was studying a new group of emails. He said they were found in a separate investigation involving former Congressman Anthony Weiner, the husband of top Clinton advisor Huma Abedin.

Comey said his agency was examining the emails to learn if they had information important to the earlier investigation of Clinton. In 2015, the FBI began investigating her use of a private email server while she worked as America's top diplomat.

The investigation was launched to discover whether Clinton had sent secret government information through the private email server. 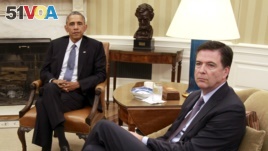 U.S. President Barack Obama (L) sits with FBI Director James Comey in the Oval Office in Washington after making comments to the media about shootings at military facilities in Chattanooga, Tennessee, July 16, 2015.

Comey told Congress earlier that the FBI had completed its investigation into Clinton's emails. In July, he announced the agency had not found enough evidence to charge her with any crime. But he did say the investigation found that she had been "extremely careless" in her email practices.

Historically, federal government agencies have attempted not to get involved in politics during election campaigns. A law called the Hatch Act sets limits on the political activities of federal employees.

Some members of the Democratic Party - and at least one Republican - accused Comey of possibly violating the Hatch Act by making his announcement. The FBI director has said he felt that informing Congress was the right thing to do because he had earlier said the investigation was over.

Hillary's Clinton campaign criticized Comey for making the announcement without providing any information about what was in the emails.

The candidate called the action "unprecedented" and "deeply troubling." She predicted that FBI officials this time would come to the same decision as before, saying "there is no case."

On Wednesday, President Barack Obama seemed to question Comey's judgement. While not talking about the FBI director by name, Obama answered a question from the website NowThis about Comey's action.

The president told the site he has been careful not to look like he is "meddling" in Comey's decision. But he added that there are rules that need to be followed.

Richard Painter once worked as a lawyer in the administration of former President George W. Bush. Painter, now a law professor at the University of Minnesota, says it was wrong for Comey to release the information so close to the election, without providing further explanation.

"This is an extraordinary violation [of the Hatch Act], and I think particularly serious. We're talking about trying to use the FBI to go after political opponents. And the FBI should never have allowed itself to be used this way."

But George Washington University law professor Jonathan Turley disagrees. He told VOA that Comey was correct in informing Congress that more investigation would take place into the emails.

"Someone can certainly question the timing - or even the means of this disclosure - but it is not a violation of federal law."

"He could (have been) accused either of a violation of omission or commission. If he had withheld this information and it turned out to be significant, many people would have blamed him after the election."

Businessman Donald Trump, the Republican Party's presidential candidate, used Comey's announcement to support earlier suggestions that Clinton should face criminal charges. He said if Clinton is elected, it would create a "constitutional crisis" because she would be under investigation while in the White House.

There was more criticism of the FBI this week. On Monday, the bureau released documents from a 15-year-old closed investigation. The case involved a pardon given in 2001 by then President Bill Clinton, the candidate's husband.

More than 120 pages relating to the pardon of businessman Marc Rich were published on the FBI's Freedom of Information Act website. Bill Clinton pardoned Rich on his final day in office. Rich had been charged with federal crimes, including tax evasion. He fled to Switzerland to avoid trial and lived there in hiding for several years. Rich died in 2013.

According to the FBI documents, the investigation focused on whether there was a link between the pardon and a large donation given to the William J. Clinton Foundation.

The documents suggest that the donor of $450,000 was Rich's former wife Denise, although she was not named. FBI agents sought to talk with her as part of the investigation into her ex-husband's pardon, according to the documents.

Comey was asked to take on the investigation into Rich's pardon in 2003 while serving as the U.S. attorney in New York City. The documents suggest that not all rules were followed during the pardon review process. But the documents did not seem to show any new information about the case, which was closed in 2005 with no charges brought.

Hillary Clinton's campaign questioned the FBI decision to make public the information just days before the election. "Absent a (Freedom of Information Act) deadline, this is odd," a campaign spokesman tweeted.

In a statement to the Associated Press, the FBI denied there was anything unusual about making the Marc Rich documents public. It said the documents were put automatically on the FBI website after several Freedom of Information Act requests were made.

Also posted to the same site in early October were documents relating to Donald Trump's father, Fred. One of them was dated 1966, and others were from 1988. The documents mainly listed information about Fred Trump's many investment properties in New York.

We want to hear from you. Do you think the FBI director was correct in making the information about the investigation public? Write to us in the Comments section, and visit 51VOA.COM.

unprecedented – adj. never having happened before

meddle – v. get involved in something that is not wanted to others

innuendo – n. statement suggesting someone did something immoral or improper

disclosure – n. the act of making something known

omission – n. something that was not included, but should have been

commission – n. the act of committing a crime

evasion – n. the act of avoiding something