FBI: No Charges for Clinton After Review of New Emails

Update Required To play the media you will need to either update your browser to a recent version or update your Flash plugin.
By Bryan Lynn
07 November, 2016


The Federal Bureau of Investigation says it has studied newly discovered emails in its investigation of U.S. presidential candidate Hillary Clinton.

FBI Director James Comey said the new emails did not change the bureau's earlier decision. The FBI again decided that no charges should be brought against Clinton for her use of a personal email server while she was U.S. secretary of state.

Comey sent a letter to members of Congress with his findings two days before the U.S. presidential election.

The FBI launched an investigation in 2015 into Clinton's use of a private email server. Investigators tried to find out if Clinton had sent secret government information through the private server. 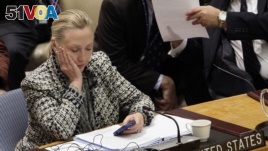 In this March 12, 2012, file photo, then-Secretary of State Hillary Clinton checks her mobile phone after her address to the Security Council at United Nations headquarters.

The emails were written before she became the Democratic Party's candidate for president.

In July, Comey announced the FBI investigation had not found enough evidence to charge Clinton with a crime. But he did say the investigation found she had been "extremely careless" in her email practices.

On October 28, Comey sent a letter to Congress stating that the FBI had found a new group of emails that could be important to the investigation. The emails were discovered in a separate investigation involving former Congressman Anthony Weiner, the husband of top Clinton advisor Huma Abedin.

Comey was criticized by many Democrats and some Republicans for the FBI's decision to make the email investigation public. The decision came as opinion studies showed the presidential race becoming close in the days before the election.

The critics argued that the decision could possibly change the minds of voters and influence the outcome of the election. Some also suggested Comey's action may have violated the U.S. Hatch Act, which sets limits on the political activities of federal employees.

In his latest letter, Comey wrote that FBI investigators had reviewed a large number of newly discovered emails since October 28. "Based on our review, we have not changed our conclusions that we expressed in July with respect to Hillary Clinton while she was secretary of state," he wrote.

Historically, federal government agencies have attempted not to get involved in politics during election campaigns.

The Clinton campaign welcomed Comey's latest decision regarding the investigation. "We were always confident nothing would cause the July decision to be revisited. Now Director Comey has confirmed it," campaign spokesman Brian Fallon said on Twitter.

Trump reacted by saying Clinton is "being protected by a rigged system." He also questioned how the FBI could have examined all the emails, which reportedly numbered in the hundreds of thousands. "You can't review 650,000 new emails in eight days. You can't do it, folks," Trump told supporters during a rally Sunday.

Bryan Lynn wrote this story for VOA Learning English. This report was based on information from Reuters and the Associated Press. Mario Ritter was the editor.

Do you think the FBI was correct in going public with details about its investigation so close to the presidential election? Write to us in the Comments section, and visit 51VOA.COM.

confident – adj. being very certain that something is true or will happen

rig – v. to control or affect an election or game in a dishonest way in order to get a desired result

rally – n. large, public meeting in support of someone or something