Update Required To play the media you will need to either update your browser to a recent version or update your Flash plugin.
By Gregory Stachel
08 June 2021


Law enforcement agencies in several countries say they have prevented crimes and made many arrests thanks to a computer app.

The U.S. Federal Bureau of Investigation (FBI) secretly operated a secure messaging service so that it would send copies of messages to its own computers. The effort was part of an operation called Trojan Shield which has led to police raids in 16 countries.

Law enforcement agencies around the world announced the operation Tuesday.

Trojan Shield led to the arrests of more than 800 criminal suspects. More than 32 tons of illegal drugs were seized. In addition, 250 guns, 55 cars and more than $148 million in cash and online currencies also were seized. 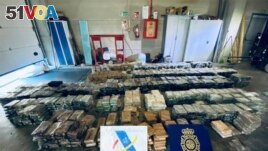 This May 2021 image from an affidavit for a search warrant, provided by the U.S. Department of Justice, shows cocaine that had been transported in hollowed-out pineapples from Costa Rica to Spain.

Later, police broke up the operations of two encrypted messaging services. They were called EncroChat and Sky ECC. Suspected criminal groups used these apps to organize drug trafficking and murders.

The suspected criminals were then looking for another way to communicate. The ANOM app was then put on cell phones that the agencies changed and that were provided to suspects.

Over the past 18 months, the FBI provided the phones to more than 300 criminal groups in more than 100 countries. They were given to suspects by people who did not know about the law enforcement operation.

Calvin Shivers is the assistant director of the FBI's Criminal Investigative Division. He told reporters in The Hague that the operation "...helped prevent a number of crimes."

He also said the intelligence gathered and examined permitted police to prevent murders. And it led to the seizure of drugs and weapons.

The operation was led by the FBI. The United States' Drug Enforcement Administration, the European Union police agency Europol and law enforcement agencies in other countries were also involved.

Top police officers around the world commented. They said an operation like this has never been seen. They also said it marks an important point in law enforcement history.

The ANOM app became popular in criminal groups as users told one another it was safe. However, police were secretly watching and listening as criminals discussed murders, drug shipments and other crimes.

Shivers commented on the move to take down messaging apps used by criminals. He said there was a hole that was created by the lack of encrypted apps.

He said it created a chance for law enforcement to work with international partners. Agencies not only developed a tool but also developed a process of gathering and sharing intelligence.

Law enforcement agencies from Sweden to New Zealand described the operation as having an important effect.

Linda Staaf is the head of Sweden's criminal intelligence division. She said Swedish police prevented several planned murders. And they believe they have arrested several "leading actors in criminal networks."

Finish police said Tuesday that nearly 100 people are being questioned. More than 500 kilograms of drugs, many guns and hundreds of thousands of dollars were seized.

Last year, European police were able to get into the encrypted communications network EncroChat. It was used by criminal groups across Europe.

Mike Corder and Nick Perry reported this story for The Associated Press. Gregory Stachel adapted it for VOA Learning English. Mario Ritter, Jr. was the editor.

cash –n. money in the form of paper bills or metal coins

currency – n. : the money that a country uses : a specific kind of money