Update Required To play the media you will need to either update your browser to a recent version or update your Flash plugin.
By Bryan Lynn
14 November, 2017


The Federal Bureau of Investigation (FBI) says hate crimes rose across the United States in 2016 for the second year in a row.

An FBI study released Monday reports there were 6,121 hate crime incidents last year, an increase of 4.6 percent from 2015.

It was the first time since 2004 that U.S. hate crimes rose two years in a row. In 2015, hate crimes increased by seven percent.

The largest group of victims, 58 percent, were targeted because of race or ethnicity, the report said. Rising hate crimes were reported against several groups including Arabs, Muslims, Jews, blacks and transgender people.

About 50 percent of these hate crimes were done because of anti-Black bias. Nearly 21 percent involved anti-White bias, while 10 percent were anti-Hispanic or Latino crimes, the report said.

About 3 percent resulted from anti-Asian bias, while nearly four percent of victims were American Indian or Alaska Native. About one percent involved anti-Arab crimes. 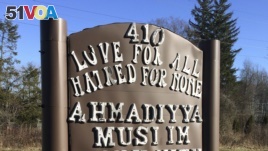 FILE - A sign bearing the words "Love for all, hatred for none" stands outside a mosque in Meriden, Connecticut, Feb. 27, 2016.

Nearly 18 percent of reported hate crimes were based on the sexual orientation of victims. Of these 1,218 incidents, 63 percent involved anti-gay bias against men.

The FBI has been gathering hate crime data since 1992. The agency's numbers are based completely on voluntary reporting from police agencies across the U.S. Therefore, the reports are widely believed to underreport the actual number of hate crimes.

In releasing the new report, the FBI said hate crimes remain the "number one investigative priority" of its Civil Rights Division.

Sessions said Monday the Justice Department is awaiting a full agency report on what steps to take to improve. The report is expected to suggest ways to better train investigators and prosecutors and improve collecting methods for hate crime data.

In a statement, Sessions said his agency will seek to make sure individuals "can live without fear of being a victim of violent crime based on who they are, what they believe, or how they worship."

Bryan Lynn wrote this story for VOA Learning English, based on reports from VOA News, the Associated Press and the FBI. Hai Do was the editor.

incident – n. an event, especially one that is bad or unusual

bias – n. belief that a group of people, ideas, etc. are better than others

priority – n. something that is more important than other things

worship – v. to show respect for god by praying or attending religious services