Update Required To play the media you will need to either update your browser to a recent version or update your Flash plugin.
By Bryan Lynn
20 June, 2016


Orlando gunman Omar Mateen called himself an Islamic soldier and praised God in Arabic during the attack at the Pulse gay nightclub, according to 911 call transcripts released Monday.

The Federal Bureau of Investigation released parts of the transcripts of calls Mateen made during the June 12 shooting.

Audio was not made public. Officials said it would be too painful for victims of the shooting and their families to hear.

During the call, the killer also spoke Arabic to the dispatcher and said, "Praise be to God, and prayers as well as peace be upon the prophet of God."

Mateen was shot dead by police during the attack on the popular gay nightclub that left 49 people dead and 53 injured. The attack was the worst mass shooting in modern U.S. history

The transcripts left out the names of groups and individuals Mateen praised during the calls. But authorities previously said he pledged allegiance to Islamic State and its leader, Abu Bakr al-Baghdadi.

Special Agent Hopper said the names were left out to avoid giving credibility and publicity to other attackers. He said, "We see no value in putting those individuals' names back out there. We're trying to prevent future acts from happening again and for cowards like this one, people like that influence them."

U.S. Republican House Speaker Paul Ryan criticized the decision to edit the transcripts and called on the Justice Department to release the full text.

"Selectively editing this transcript is preposterous. We know the shooter was a radical Islamist extremist inspired by [Islamic State]," Ryan said in a statement. "We also know he intentionally targeted the LGBT community. The administration should release the full, unredacted transcript so the public is clear-eyed about who did this, and why."

At 2:48 a.m., Mateen began one of three conversations with crisis negotiators. During these calls, he identified himself as an Islamic soldier. He again pledged his allegiance to Islamic State and demanded an end to U.S. bombing in Syria and Iraq, saying that was why he was "out here right now."

When the negotiator asked what he had done, Mateen answered, "No, you already know what I did."

The transcripts also provide some new information about the timeline for the attack.

Within six minutes of the first emergency call to police at 2:02 a.m. that shots were fired, Orlando Police Department officers arrived at the nightclub and exchanged gunfire with Mateen.

A SWAT team was called to the scene at 2:18 a.m. About two hours later, officers pulled an air conditioning unit out of a window at the nightclub and helped some people escape. 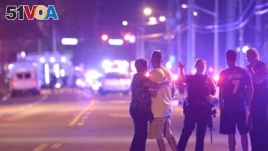 Orlando Police officers direct family members away from a multiple shooting at a nightclub in Orlando, Fla., Sunday, June 12, 2016. A gunman opened fire at a nightclub in central Florida, and multiple people have been wounded, police said Sunday.

At 4:29 a.m., victims told police Mateen had threatened to put four explosive vests on people within 15 minutes. He also told police he had put explosives in a vehicle outside the nightclub. "You people are gonna get it, and I'm gonna ignite it if they try to do anything stupid," he said. No bombs or vests were found.

At 5:02 a.m., SWAT officers and a hazardous materials team broke through a wall of the nightclub with an armored vehicle.

At 5:15, Orlando police said they had killed Mateen.

The FBI said that during the three hours between the initial gun battle with Mateen and the final assault by SWAT, no shots were fired inside the nightclub. During this time, police said they were going inside to rescue as many victims as possible.

Bryan Lynn wrote this story for VOA Learning English. Additional information came from the Associated Press and Reuters. Hai Do was the editor.

Write to us in the Comments section, and visit 51VOA.COM.

Editor's Note: The FBI released the full transcript of the 911 call from Omar Mateen later in the day.

OD: Emergency 911, this is being recorded.

OM: In the name of God the Merciful, the beneficent [Arabic]

OM: Praise be to God, and prayers as well as peace be upon the prophet of God [Arabic]. I wanna let you know, I'm in Orlando and I did the shootings.

OM: My name is I pledge of allegiance to Abu Bakr al-Baghdadi of the Islamic State.

OM: I pledge allegiance to Abu Bakr al-Baghdadi may God protect him [Arabic], on behalf of the Islamic State.

OD: Alright, where are you at?

OD: Where in Orlando?

transcript – n. a written or printed version of words that were spoken

propagate – v. to make known to many people

cowards – n. person lacking courage to do what is right

unredacted – adj. full version of a document that has not been edited or altered