Update Required To play the media you will need to either update your browser to a recent version or update your Flash plugin.
By Hai Do
23 August 2021


The U.S. Food and Drug Administration (FDA) on Monday gave full approval for the Pfizer-BioNTech COVID-19 vaccine. The action may help raise public trust in the vaccine as the country and the world battle the fast-spreading Delta variant of the coronavirus.

Acting FDA Commissioner Janet Woodcock said in a statement: "...as the first FDA-approved COVID-19 vaccine, the public can be very confident that this vaccine meets the high standards for safety, effectiveness, and manufacturing quality the FDA requires of an approved product."

The vaccine, made by Pfizer and its German partner BioNTech, was the first shot to be approved for emergency use by the FDA last December. The FDA has also approved vaccines from Moderna and Johnson & Johnson for emergency use.

Approval could lead to vaccine requirements

The full approval came as governments, schools and businesses around the United States are considering requiring vaccinations for employees, students and others.

Last month, U.S. President Joe Biden announced that federal employees and those who work with the federal government are required to show proof of vaccination or have regular testing. 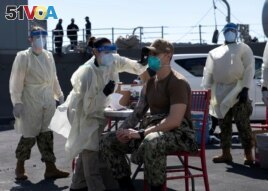 FILE - A United States Navy officer from the USS San Diego receives a vaccine against coronavirus at the navy port in Manama, Bahrain in this picture taken February 26, 2021 and released by U.S Navy on February 27, 2021. (Brandon Woods/U.S. Navy/Handout via REUTERS)

Members of the U.S. military will be required to be vaccinated against COVID-19 beginning next month.

Also on Monday, New York City announced it is requiring all public school teachers and workers in the nation's largest school system to be vaccinated.

Dr. Carlos del Rio is with Emory University in the state of Georgia. He told The Associated Press, "I think a lot of businesses have been waiting for" the full approval from the FDA. He noted that requiring people to get the shots "becomes much easier when you have full approval."

An AP-NORC Center for Public Affairs Research study released this week found that a majority of Americans, up to 59 percent, support a vaccine requirement for teachers and students.

Democrats and Republicans in the U.S. have differing opinions about vaccine requirements in schools. Only 38 percent of those who identified as Republican support a vaccine mandate for teachers. By comparison, 81 percent of self-identified Democrats support such a requirement.

The Kaiser Family Foundation reported earlier this month that most unvaccinated adults in the country do not believe vaccines are effective. Some even see the shots as a greater health risk than the actual disease.

FDA chief Woodcock noted: "While millions of people have already safely received COVID-19 vaccines, we recognize that for some, the FDA approval of a vaccine may now instill additional confidence to get vaccinated."

The FDA said the vaccine continues to be available under emergency use for young people between the ages of 12 and 15.

The agency has also advised a third shot, known as a booster, for those with a weakened immune system. But the Biden administration announced last week it plans to provide the third shot to all Americans.

Israel has one of the world's highest vaccination rates using the Pfizer-BioNTech shots. In early July, it became the first country to give coronavirus boosters to people with weakened immune systems. Israel's Prime Minister Naftali Bennett then announced that the country would offer the booster to all people over 60.

Israel's Ministry of Health reported on Sunday that the third shot of Pfizer has greatly improved protection from infection and serious illness among Israelis aged 60 and over.

However, health officials with the World Health Organization (WHO) have asked wealthier and more highly vaccinated countries to delay offering booster shots. They said it would be better to give more shots to unvaccinated people in developing countries.

WHO chief Dr. Tedros Adhanom Gebreyesus said, "We cannot accept countries that have already used most of the global supply of vaccines using even more of it, while the world's most vulnerable people remain unprotected."

Hai Do wrote this story for VOA Learning English with additional reporting from the Associated Press. Ashley Thompson was the editor.

variant - n. something that is different in some way from others at the same kind

confident - adj. certain that something is true

outcome - n. something that happens as a result of an activity

regular - adj. happening over and over again

mandate - n. an official order to do something.

instill - v. to gradually cause someone to have (a feeling, etc.)

immune system - n. the system that protects your body from diseases and infections