Update Required To play the media you will need to either update your browser to a recent version or update your Flash plugin.
By Alice Bryant
01 May 2021


American health officials are again promising to seek a ban on menthol cigarettes. This time, they are under pressure from African American groups to remove the menthol taste popular among Black smokers.

The U.S. Food and Drug Administration (FDA) has tried several times to ban menthol cigarettes, also known as menthols. But it faced major opposition from the tobacco industry, some lawmakers and interest groups under the two former administrations. Any menthol ban will take years to go into effect and will likely face lawsuits from tobacco companies. 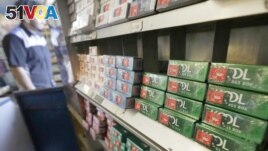 FILE - This May 17, 2018 file photo shows packs of menthol cigarettes and other tobacco products at a store in San Francisco. On Thursday, April 29, 2021, the Food and Drug Administration pledged again to try to ban menthol cigarettes, this time under pre

The FDA's announcement Thursday is the result of legal action in 2020 by anti-smoking and medical groups. The groups argued that officials had "unreasonably delayed" answering a 2013 petition seeking a menthol ban.

The agency said it aims to launch measures banning menthols in the coming year.

The action would also ban tobaccos made to taste like fruit. Such products are becoming more popular with young people, especially young Black people.

Mitch Zeller leads the FDA's Center for Tobacco Products. He said in a statement: "Taken together, these policies will help save lives and improve the public health of our country." Zeller noted that smoking is the leading cause of preventable disease and death in the U.S.

Menthol is the only cigarette flavor that was not banned under a 2009 law that gave the FDA power over tobacco products. But the law did require the agency to continue to consider such a ban.

Anti-smoking activists are angry that menthol products are still on the market. They point to research that menthol's cooling effect suppresses a smoker's sense of pain. The research says this likely makes it easier to start and harder to stop. The mint-flavored cigarettes are mostly used by young people and people of color. About 85 percent of Black smokers smoke menthols. About one-third of white smokers do as well.

"The science is there, the data is there, so why are these products still on the market?" Carol McGruder told the Associated Press. McGruder is a founding member of the African American Tobacco Control Leadership Council.

For many years, tobacco companies marketed their menthol cigarettes to Black communities. Their campaigns included financing music performances and neighborhood events. Company documents released through the 1990s lawsuits also show the companies saw menthols as good "starter" products as they appealed to teens.

In the late 1990s, new restrictions banned cigarette ads from billboards, public transport and most tobacco-financed events. Companies moved much of their marketing to places like gas stations and small neighborhood markets. Research has shown both kinds of businesses are heavily present in Black neighborhoods.

About one-third of all cigarettes sold in the U.S. are menthols so a ban would hurt tobacco industry profits. As smoking has decreased in America, tobacco companies have been pushing similar products, including electronic cigarettes. But those still make up a very small percentage of industry sales.

The Altria corporation owns several tobacco product companies. It sharply criticized the FDA proposal, which it described as "criminalizing menthol."

Smoking causes cancer, strokes and heart attacks and is blamed for 480,000 deaths each year. About 14 percent of Americans smoke cigarettes, with rates around the same between white and Black populations. But Black smokers are less likely to effectively stop smoking, which the U.S. Surgeon General and others have linked to menthol cigarettes.

Menthol is a chemical compound found naturally in mint plants. But it can be produced in a laboratory. Known for its cooling effect, the chemical is also used in some medicines. Cigarette makers began adding the chemical in the 1920s after realizing it reduced the burning feeling smokers can experience.

Past government efforts against menthol have faced resistance from lawmakers in tobacco states like North Carolina. But some members of the Congressional Black Caucus (CBC) who received campaign donations from cigarette companies also opposed the ban.

Some CBC members warned that banning menthol would create an illegal market for the products. And they said it might lead to increased law enforcement in Black communities.

Yet calls for action have been growing. And last year the House of Representatives voted to ban the flavor with support from most Black members. The bill was ignored in the Republican-controlled Senate after President Trump made clear he opposed the measure.

The Associated Press reported this story. Alice Bryant adapted it for Learning English. Caty Weaver was the editor.

menthol – n. an oil made from mint that has a strong smell and is used in cigarettes, candy and medicines for sore throats

cigarette – n. a small roll of paper that is filled with cut tobacco and smoked

lawsuit – n. a case in court involving a claim or complaint by one party against another

petition – n. a document that many people sign to show that they want a person or organization to do or change something

flavor – n. a substance or extract that provides a particular taste

billboard – n. a flat surface or board, usually outdoors, on which very large advertisements or notices are posted