Update Required To play the media you will need to either update your browser to a recent version or update your Flash plugin.
By Gregory Stachel
24 November 2022


Gule Wamkulu is a dance performed by unidentified men in Malawi, Mozambique, and Zambia. The group performs the dance at ceremonies to mark adulthood among other important life events. They wear complex masks, makeup and traditional clothing. The dance is seen as a way to connect with spirits of the dead.

However, the group today is increasingly opening up to the public.

Gule Wamkulu is rooted in the Chewa people of southern Africa. Followers spread the dance to Zimbabwe in the early 1900s. 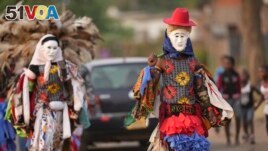 It is hard to estimate how many Gule Wamkulu performers there are. The dancers belong to small, loosely connected groups. Gule Wamkulu was considered evil by Christian colonizers who attempted to ban the tradition.

Notice Mazura organized a dance in an area of Zimbabwe's capital city called Mufakose. A group of people, including young children, came to get a closer look at the dance.

In the past, "even the adults would prefer to watch our dances from a distance. People were scared of us," said Mazura.

In 2008, UNESCO included Gule Wamkulu on its list of Intangible Cultural Heritage of Humanity. It is a list of arts, ceremonies, and traditions found around the world that are passed from one generation to the next. The United Nations agency describes Gule Wamkulu as a "secret society of initiated men" involved in a "ritual dance" dating to the 17th century.

Over the years, some reports came out that damaged the image of Gule Wamkulu. There was a story about a young man who died during a ceremony. Another report said a man was severely attacked for breaking group rules.

Gule Wamkulu in Zimbabwe is also threatened by people who falsely claim to be members of the group. These people carry out performances and falsely identify for criminal purposes. They are called copycats. Sometimes, these copycat groups are violent.

The problem is one of the main reasons for the public image campaign.

Kennedy Kachuruka is the leader of the Zimbabwe Gule Wamkulu Organization. "We want people to respect us and not fear us," he said." We don't want to push them away, but we want to charm them. That is the only way they can appreciate who we really are."

Kachuruka is also president of the Zimbabwe National Traditional Dancers Association. He described Gule Wamkulu as "a ceremonial dance to connect with the dead."

The dances are traditionally performed at funerals, weddings, and other events involving members. But the group has been doing more public performances in recent years, including performing with popular musicians.

Members hope that the more people learn about the real Gule Wamkulu, the more easily they will recognize the copiers.

"These people are evil," said George Dezha of Mufakose. He added, "They move around with weapons and are violent criminals."

There is still much mystery surrounding Gule Wamkulu. The identity of those who wear face coverings is kept secret. The religious centers where they prepare for performance is closed to non-members. And becoming a member involves secret activities.

Kachuruka said they are trying to keep the rituals left to them by their fathers. And added the most important part is their secrets. "Without them we are nothing," he said. And he added, "It's not just a dance, it's a way of life. It's a culture and a religion."

Phineas Magwait is an expert on music and culture at the Midlands State University in Zimbabwe. He said the main reason for copiers is financial. Unsuspecting people pay for dances from unofficial performers.

He called the public outreach campaign "a turning point" for Gule Wamkulu that would help outsiders understand it as a cultural activity.

mask – n. a covering used to hide or disguise your face

makeup – n. materials (such as wigs or cosmetics) that are used to change the appearance of an actor

scared – adj. afraid of something

initiate – v. to formally accept (someone) as a member of a group or organization usually in a special ceremony

charm – v. to attract (someone) by being beautiful or welcoming

appreciate – v. to understand the worth or importance of (something or someone)