Update Required To play the media you will need to either update your browser to a recent version or update your Flash plugin.
By Ashley Thompson
04 July 2021


The medical services for pregnant women at the health clinic closest to Monica Maxwell's home in Malawi were free. The cost to get there, however, was more than Maxwell could pay for.

Because of the pandemic, she was earning less money than usual selling tomatoes at a local market. Her husband's earnings had also dropped.

"It was the most difficult period of our lives. We had no money for our daily survival," the 31-year-old Maxwell said as she waited to be seen by a medical midwife. It was only her third visit to the medical center during her pregnancy. She was 36 weeks pregnant. 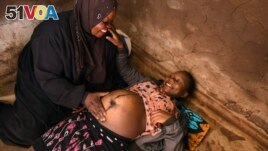 Lucy Mbewe, a traditional birth attendant attends to a pregnant woman at her home, in Simika Village, Chiradzulu, southern Malawi on Sunday, May 23, 2021.

In Malawi, many hospitals have so little equipment that women are expected to bring their own tools to cut their babies' umbilical cords. The deepening poverty brought on by the COVID-19 pandemic has made things even riskier for women giving birth. Officials say far fewer pregnant women in the country are getting the health care they need.

At the Ndirande Health Center, about 100 women visited each day for prenatal services before the pandemic. When COVID-19 began, that number dropped by half. Now, as few as 15 to 20 patients visit the clinic, said Jacqueline Kolove, a nursing officer at the clinic.

Many families cannot pay for treatments at medical clinics. Or, like Maxwell, they do not have the money to get there.

Money is not the only reason women are not coming to the clinic. Pregnant women may fear they will get the coronavirus in a medical center.

Because of this, more pregnant women are depending only on traditional birth attendants. Birth attendants provide women with emotional support and offer traditional plant treatments. The government bans attendants from delivering babies because they lack formal training. The ban is rarely enforced.

Today, Malawi risks losing the gains it has made over the past 10 years to lower the number of deaths among pregnant women. Malawian women face a 1-in-29 lifetime risk of death related to a pregnancy or birth. That information comes from the United Nations Population Fund. The country has 439 such deaths per 100,000 live births. That number is down from 984 per 100,000 in 2004.

At Ndirande and other clinics, nurses, aides and medical midwives give pregnant women ultrasounds and use equipment to examine the mother and baby. A woman can undergo an operation called a cesarean section if needed, and medications are available to stop severe bleeding.

Traditional birthing attendants learn from elders who pass down knowledge through generations and use little or no medical equipment. They listen to women's stomachs by placing their ears there and use herbs to cause labor.

Lucy Mbewe is a birth attendant. She is 56 years old and estimates she has delivered 4,000 babies since 1983. She says the attendants' work is important for women who cannot pay for anything else.

Some medically trained midwives say the increased use of attendants has caused a rise in complicated deliveries, with women going to the hospital only once it is too late to save them.

Midwives and health officials also say they are fighting against misinformation about the virus and vaccines that lead women to not seek necessary medical care. Nurses and midwives say some women fear they will secretly be given the vaccine if they deliver at a medical center.

Malawi did not have a full lockdown. It has seen a major rise in coronavirus cases. Concern about the vaccine is widespread in the country.

Five months into her pregnancy, Margret Kosamu has yet to visit a health clinic. Instead, the 30-year-old has turned to a traditional birth attendant for just two visits. Her family's earnings from farming have dropped. But for her, it is not only an issue of money. She fears that visiting a medical center that could kill her, not save her life.

"One is more likely going to contract the virus at the hospital than here," she said of the attendant's care.

Patricia Gunde is 26 years old. She has not received any prenatal services during her pregnancy. She chooses instead to receive the herbs her attendant says will keep her healthy and make childbirth go more quickly. Gunde has no plans to get a COVID-19 vaccine.

"I am afraid," she said of the vaccine. "I have heard many stories about it."

clinic - n. a place where people get medical help

midwife - n. a person (usually a woman) who helps a woman when she is giving birth to a child

umbilical cord - n. a long, narrow tube that connects an unborn baby to the placenta of its mother

prenatal - adj. relating to pregnant women and their unborn babies

per - preposition. for each

caesarean section - n. a surgical operation for giving birth in which a cut is made in the mother's body so that the baby can be removed through the opening

herb - n. a plant or a part of a plant that is used as medicine or to give flavor to food

contract - v. to become ill with (a disease)