Study: More Female College Students Than Ever Identify As Liberal

Update Required To play the media you will need to either update your browser to a recent version or update your Flash plugin.
By VOA
03 June, 2017


The victory of Donald Trump in the 2016 presidential election came as a surprise to many people in the United States.

Most political observers predicted Trump would lose the election to Hillary Clinton. But he won, in large part because of older male voters.

However, other groups did not share in that support. One of them was American college students, mostly female students.

The study comes from the Higher Education Research Institute at UCLA, the University of California in Los Angeles.

Researchers launched the study in 1966. They ask first-time, full-time students at four-year colleges and universities around the country about different subjects. Last year, the study gathered information from over 137,000 students at 184 different schools.

One of the subjects the study asks about is U.S. politics. The study asks college students to identify themselves politically in one of five groupings. They are liberal; extreme liberal or "far left"; conservative; extreme conservative or "far right"; and moderate or "middle of the road." Since the beginning of the study, moderate students have always been, and still are, the largest group.

Kevin Eagan is an assistant professor at UCLA. He also is the managing director of the Higher Education Research Institute. He says the number of female college students identifying as liberal has been rising since the 1990s. 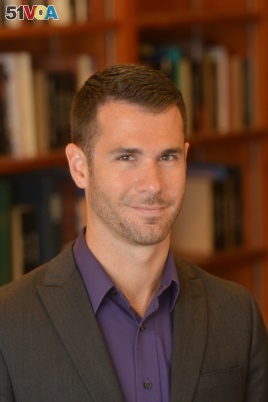 There have been periods when male students were more liberal than females, such as during the 1960s and 1970s. But Eagan notes the number of young people identifying with one party over another has a lot to do with the politicians who represent those parties.

For example, the Republican Party chose former California governor Ronald Reagan as its presidential candidate in 1980. Reagan was elected and served eight years in the White House. Information collected during that period showed large decreases in the number of liberal college students.

Kevin Eagan believes that many young women likely identified with Hillary Clinton last year because she was a woman. Clinton was the presidential candidate of the Democratic Party, which has supported more liberal policies in recent years than the Republicans.

Eagan says Trump also likely pushed women to the left through his actions and statements about women. For example, during the 2016 election campaign, news media uncovered a recording of Trump from several years earlier. In the recording, he made jokes about inappropriate contact with woman. Several other women came forward and accused him of sexual wrongdoing. Trump and his campaign denied the sexual misconduct claims.

"With a candidate last year on the Republican side who was characterized by the media, perhaps rightfully so, as misogynistic and not really supportive of women ... I think that that just served to exacerbate this trend that we're seeing related to women ... shifting their political perspectives."

But college student Nesha Ruther says she does not identify as liberal simply because the more liberal presidential candidate was a woman. Ruther is from Takoma Park, Maryland. She began taking classes at the University of Wisconsin in 2016. She is a registered Democrat.

Ruther wanted Vermont Senator Bernie Sanders to serve as the party's candidate last November. She says she did so because of his support of issues like ending police violence against African Americans and raising taxes on the wealthy.

After Sanders lost the nomination to Clinton, Ruther grew concerned about Trump's calls to limit public money for healthcare services that mainly serve women. She also opposed his calls to restrict medical operations for ending a pregnancy. So the Maryland woman supported Clinton's candidacy.

Ruther argues that many women choose to identify as liberal because of their position on issues that most affect them. This includes making sure women are paid the same as men for the same work, and that women should be included in making decisions on rules affecting reproductive health.

"In this day and age, liberalism ... is more appealing to women because it is a movement that is for progress. So it's not the way things have been previously, and in that way it is more geared towards the empowerment of women, the increased social mobility of women."

Hans Noel teaches political science at Georgetown University in Washington, DC. He notes that liberals are not the majority among American women.

In fact, the Washington Post newspaper reported that 61 percent of white women without a college degree voted for Trump. But many more young women in recent years identify themselves as feminists and support politicians who support women's rights.

Noel says the political right in the U.S. has grown increasingly conservative, especially on issues like access to birth control. And the political left has grown more feminist.

"What it means to be liberal, conservative, what it means to be Democratic or Republican, it evolves and changes. And it's not like that suddenly being liberal has been pro-feminist, suddenly. That's been around for a while. But that certainly has been a highlighted issue in the last several years, and particularly the last election."

Noel adds that colleges and universities are often places that support more liberal ways of thinking. And it is almost natural that young women would side with whatever political movement they feel most supports their needs.

But he says the most important thing to consider is not their political opinions, but whether or not younger Americans will vote in elections. People between 18 and 35 years old represent 31 percent of the voters nationwide. But only about half of them voted in 2016.

We want to hear from you. Who do you think identifies more as liberal in your country: men or women? What about as conservative? Why? Write to us in the Comments Section or on 51VOA.COM.

misconduct – n. behavior or activity that is illegal or morally wrong

characterize(d) – v. to describe the character or special qualities of someone or something

misogynistic – adj. the quality a man who hates women

exacerbate – v. to make a situation or problem more intense

shift(ing) – v. to change or to cause something to change to a different opinion or belief

perspective(s) – n. a way of thinking about and understanding something

geared toward (s) – p.v. to make something a match for a particular use or type of person

social mobility – n. the movement of individuals, families, households, or other categories of people within or between different levels of power, privilege, opportunity or wealth in a group of people in general thought of as living together in organized communities with shared laws, traditions, and values

feminist(s) – n. a person who believes the that men and women should have equal rights and opportunities

highlight(ed) – v. to make or try to make people notice or be aware of someone or something