Update Required To play the media you will need to either update your browser to a recent version or update your Flash plugin.
By Mary Gotschall
12 February, 2016

UNICEF is the UN children's agency. They said in a report released Thursday that at least 200 million girls and women alive today have had ritual cutting. The practice of cutting and stitching a female's genitals is a cultural practice focused on modesty and chastity.

Half of the victims live in just three countries – Egypt, Ethiopia and Indonesia. 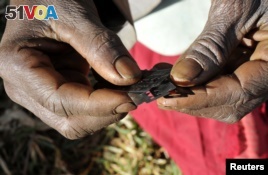 This is nearly 70 million more girls and women than estimated in 2014. New data was collected in Indonesia. The practice has been banned there since 2006.

Somalia has the highest rate of women and girls who have been cut. It affects 98 percent of the female population between the ages of 15 and 49. Guinea, Djibouti and Sierra Leone also have very high rates.

About 44 million victims of female genital mutilation around the world are aged 14 or younger. The majority of girls who have their genitals mutilated were cut before they were 5 years old, reported UNICEF.

"In Yemen, 85 percent of girls experienced the practice before their first week of life," said the report.

UNICEF said exact numbers are hard to find. Few of the 30 countries where it is practiced keep reliable data on the procedure. Most rely on household surveys.

The practice also exists in countries not in the study. This includes India, Malaysia, Oman, Saudi Arabia and the United Arab Emirates. In addition, the practice happens in parts of Australia, North America and Europe, where immigrants from countries with a large number of female circumcisions live.

The report said that total rates of female genital mutilation have fallen in the last three decades. But progress has been uneven. Countries that have seen sharp declines include Liberia, Burkina Faso and Kenya.

The UN General Assembly unanimously approved a resolution in December 2012 calling for a ban on female genital mutilation. It is a centuries-old practice stemming from the belief that circumcising girls controls women's sexuality and increases fertility. Last September, the UN set a goal of eliminating the practice by 2030.

ritual – adj. done as part of a ceremony or ritual

modesty – n. the quality of behaving and especially dressing in ways that do not attract sexual attention

chastity – n. the state of not having sex with anyone

mutilate – v. to cause severe damage to (the body of a person or animal)

circumcision – n. the act of cuting off the clitoris or outer sexual organs of (a woman or girl)

unanimously – adv. agreed to by everyone

resolution – n. the act of finding an answer or solution to a conflict, problem, etc. : the act of resolving something

sexuality – n. the sexual habits and desires of a person

fertility – n. the state or condition of being fertile: the ability to produce young