Update Required To play the media you will need to either update your browser to a recent version or update your Flash plugin.
By John Russell
28 December 2022


An Iranian player taking part in an international chess competition in Kazakhstan is not wearing a hijab for the second day, Reuters reports.

At the FIDE World Rapid and Blitz Chess Championships in Almaty, Kazakhstan, a Reuters reporter said Sara Khadem was competing without a head covering. That act is a violation of Iran's laws governing what clothes females should wear.

Iranians have been demonstrating against the country's leadership since mid-September. The demonstrations started after 22-year-old Iranian Kurdish woman Mahsa Amini died while being detained by morality police who seized her for "inappropriate attire." That means she was not wearing legally required or permitted clothing. 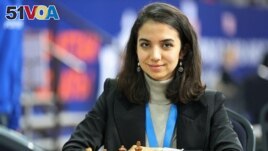 Sara Khadem of Iran sits in front of a chess board at the FIDE World Rapid and Blitz Championships in Almaty, Kazakhstanon on December 28, 2022 . (REUTERS/Pavel Mikheyev)

Laws concerning hijab wearing have become an important part of the protests. Several sportswomen competing overseas have appeared in public without hijabs.

Khadem was born in 1997. She is also known as Sarasadat Khademalsharieh. She is ranked number 804 in the world, the International Chess Federation website says. The website for the December 25 to December 30 event listed her as taking part in both the Rapid and Blitz competitions.

Iranian news services Khabarvarzeshi and Etemad reported earlier this week that Khadem had competed in the event in Almaty without a hijab.

John Russell adapted this story from a Reuters report.

chess – n. a game for two players in which each player moves 16 pieces across a board and tries to place the opponent's king in a position from which it cannot escape