Update Required To play the media you will need to either update your browser to a recent version or update your Flash plugin.
By VOA
22 August, 2014


The disputed shooting of an unarmed black teenager by a white police officer in Ferguson, Missouri has led to an increased interest in body cameras. A small number of American police officers wear such cameras.

The U.S. Department of Justice reported on body cameras earlier this year. The report said the use of force by police in one city dropped by 60 percent after police began wearing the cameras. The city was Rialto, California. Complaints against police officers also dropped by 88 percent.

Michael White wrote the report. He is a professor at Arizona State University's School of Criminology and Criminal Justice. He says "given what has been going on in Ferguson, it has become clear that police departments would benefit tremendously by having that equipment because of the evidence."

He says we are "hearing two very different stories about what happened," in the shooting in Missouri. He says "we simply don't know which version is accurate, and as a result, everyone is left to speculate."

Professor White says a body camera could have shown what happened in the shooting.

Taser is a top maker of body cameras. Steve Tuttle is a spokesman for the company. He says Taser began experimenting with body cameras in 2006. 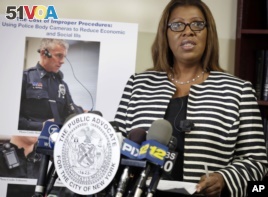 He says "what we found was they were tremendous at taking the ‘he said, she said' element out of incidents."

In addition to the body camera, Taser makes a camera that can be placed on a police officer's glasses.

The Taser cameras are always recording. But the video is often replaced by new video because there is a low limit on the amount that the camera can store. If the police officer wants the camera to record and save video, she or he must press a button on the camera. The camera then saves video and sound beginning 30 seconds before the button was pressed.

Mr. Tuttle said all of the video is marked so it cannot be secretly edited or changed. Experts could identify if any part of the video had been changed.

He says extremely few people were talking about this technology even as recently as three years ago.

He says there are 18,000 state and local police departments. But he says the two top body camera makers say only about 4,000 agencies are using them.

Professor White says police in Britain have been using body cameras since 2005.

He believes a large number of American police departments will start using body cameras as a result of the shooting in Missouri. He says he believes the devices will become common, even though not everyone likes them. He says that it has happened with cameras on police cars and electric shock weapons called Tasers. He says both technologies faced opposition when they were first created, but are now used in most American police departments.

The pressure to use body cameras was increasing before the shooting in Missouri.

A year ago, a state judge said the New York City Police Department's program to freely stop and search people was unconstitutional. She ordered the department to begin placing body cameras on its police officers. She said she believed the move would reduce, in her words, "some of the mistrust that has developed between the police and the black and Hispanic communities." She also said she believed it would be helpful to members of the department who are wrongly accused of criminal acts.

Still, Professor White says there are issues to consider before putting body cameras on police. And he says research has not confirmed that police and citizens act better when body cameras are recording.

The report says there are concerns about the privacy of both citizens and police officers. And there is a concern about cost. The price of the cameras has dropped sharply in the past several years -- to as little as $350. But police departments must still pay for training and for developing policies about use of the cameras and the video and sound they record.

But the cameras may help lower costs in other areas. Accused people may admit guilt more quickly if there is a video showing them violating the law. And police departments would save money if they do not have to investigate wrongful accusations of crimes by police. Now, departments are required to investigate all accusations. Video evidence may persuade people not to make false accusations.

Worries about privacy may be lessening. The American Civil Liberties Union works to protect individual rights. It says the cameras can help citizens and police.

This story was reported by VOA reporter Matthew Hilburn in Washington. The story was adapted for Learning English by Christopher Cruise and edited by Caty Weaver. It was narrated by Bob Doughty.

complaint - n. a formal allegation against a party; a statement that you are unhappy

professor - n. a teacher at a college or university

benefit - n. a good or helpful resutlt and effect

pressure - n. the force produced when something is pushed gainst something else