Update Required To play the media you will need to either update your browser to a recent version or update your Flash plugin.
By Dan Friedell
26 September, 2016

Jose Fernandez was one of professional baseball's most exciting young players in the United States.

Fernandez was a rising star for Major League Baseball's Miami Marlins. The team plays its home games in Miami, Florida. He was born in nearby Cuba.

Fernandez died in a boating accident early Sunday morning. He was only 24 years old. 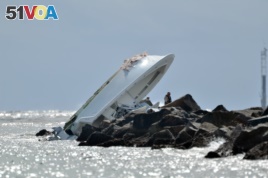 Investigators look at a boat overturned on a jetty, Sunday, Sept. 25, 2016, off Miami Beach, Florida.

Public safety officials say he was on a 10-meter long boat with two other people. They said the boat was going at full speed when it struck rocks in waters near Miami Beach, killing all three people.

People around the United States and in Latin American countries are reacting to the death of Jose Fernandez.

Fernandez left Cuba with his mother when he was only 15 years old. After a short stay in Mexico, he moved to the United States.

He was unsuccessful in his first three attempts to leave the island nation. Until recently, Cubans were not permitted to freely leave the country in order to seek work with a U.S. employer.

Five years ago, Fernandez signed an agreement to play for the Miami Marlins. A short time later, he made his first appearance in Major League Baseball.

In 2013, Fernandez won an award for being one of the best first-year players in baseball. In his four seasons as a Major League Baseball player, he pitched two times in the All-Star Game, which honors the sport's best players.

He missed parts of the 2014 and 2015 seasons recovering from an arm injury which required surgery. But this year, he was again one of the best pitchers in baseball.

In his last game, on September 20, he helped the Marlins defeat the Washington Nationals. He pitched eight innings and prevented Washington from scoring any runs.

While Fernandez was a great pitcher, many people say they will miss his personality. Fernandez did not hide his emotions on the field. He cheered when his team made great plays. He was sad when his team lost.

Baseball teams are remembering Fernandez in different ways. Some teams hung a large piece of cloth with his name near the field. Others painted his number – 16 – on the field.

The Marlins did not play on Sunday because of his death.

Will you miss Jose Fernandez? We want to hear from you. Write to us in the Comments Section or on 51VOA.COM.

inning – n. one of the usually nine parts of a game in which each team bats until three outs are made

run – n. a score made in baseball when a player reaches home plate after going around the bases

professional – adj. related to a job that requires special skill or training

pitch – v. to throw something, usually toward a target