Update Required To play the media you will need to either update your browser to a recent version or update your Flash plugin.
By Caty Weaver
01 October, 2014


South Korean lawmakers have agreed to launch a new investigation into the deadly passenger boat accident in April. The agreement followed months of inaction by the National Assembly.

Now the country's unity and sympathy for the victims following the disaster has turned into deep political division. VOA reporter Jason Strother investigated the situation in Seoul.

Lee Jeong-chul‘s teenage son was among the 300 mostly high school students who died in the Sewol ferry disaster. The passenger boat sank in waters near the southwestern coast of South Korea on April 16th. 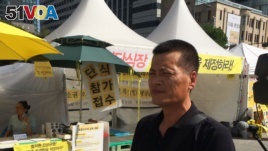 For the past two months, Mr. Lee, parents of other Sewol victims, and their supporters have demonstrated. South Koreans demand a special law for the sunken ferry Sewol on Aug. 15, 2014. But others are saying enough is enough. (AP Photo/Lee Jin-man)

The group is occupying a public space in downtown Seoul.

Investigators have said the ship most likely sank because of illegal repairs to the boat and overloading.

But Mr. Lee says the families are still looking for the truth.

Mr. Lee says the families want a safer country, so that something like this will never happen again and parents won't have to suffer as they have.

The families had supported a bill in the National Assembly that would open a new investigation into the disaster. Lawmakers finally passed that measure this week. But many people are not happy with the measure.

Jang Seong-hwe is an activist who has worked with the Sewol victims' families.

He says he is unhappy. He says the agreement does not permit the families to choose the leader of the investigation. Mr. Jang says the families and their supporters will not end their protest.

But they are not the only ones demonstrating.

For a month, other activists have had their own demonstration against the Sewol families nearby. The demonstrators are calling on the families to return donated money.

Some even burned a flag with yellow ribbon that honored the Sewol victims.

Political commentator Byun Hee-jae was among the demonstrators. He says at first everyone felt sympathy for the Sewol families. But now, he says, they are asking too much.

We have already had an investigation, he says. It blamed the ferry company and the coast guard. There is nothing more to discuss about it.

Mr. Byun tweeted that the fight is not over even though lawmakers passed the measure for a new investigation.

Recent studies in South Korea also show that public opinion differs about the measure. Some observers say that after six months South Koreans may have tired of the Sewol issue.

Michael Breen is a writer for The Korea Times. Mr. Breen says the parents and their cause may have lost sympathy because the disaster turned into a political concern.

Grieving father Lee Jeong-chul says he is upset with the opposition to Sewol families. He says he is not happy with the lawmakers either.

Mr. Lee says the ruling and opposition parties should stop searching for political gains in this situation. He says the ferry accident should not have turned into a political fight.

For their part, South Korean lawmakers say they will decide later if the Sewol victims' families can be a part of the new investigation.

Jason Strother reported this story from Seoul. Caty Weaver wrote it for Learning English. Hai Do was the editor.

unity – n. the state of being in full agreement

coast – n. land on the edge of an ocean

suffer – v. to feel pain in the body or mind; to receive or experience hurt or sadness

family – n. the group that includes children and their parents

sympathy – n. a sharing of feelings or emotions with another person, usually feelings of sadness