Update Required To play the media you will need to either update your browser to a recent version or update your Flash plugin.
By Dan Novak
02 August 2022


As the start of the new school year gets closer, COVID-19 infections in some areas are again on the rise.

Some school systems around the country have moved to hire more workers to limit disruptions. But many are hoping for the best without doing things differently compared with last year.

Even some school systems that had severe outbreaks are making few changes. Among those is Baltimore County schools in the eastern state of Maryland. 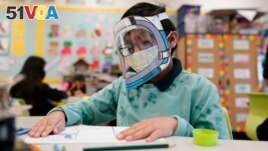 FILE - A student wears a mask and face shield in a 4th grade class amid the COVID-19 pandemic at Washington Elementary School on Jan. 12, 2022. (AP Photo/Marcio Jose Sanchez, File)

The number of days that Baltimore public schools could not offer in-person learning totaled 116 from January to June of this year. That number comes from the private research firm Burbio. It tracks over 5,000 school districts nationwide.

School officials said they did not see a need to take more measures. Charles Herndon is a Baltimore County Public Schools spokesperson. He said he does not think there will be "significant" disruptions this coming school year.

But the school district is prepared to move classes online if necessary.

Teacher shortages remain a major concern, even bigger than COVID-19 itself, said Dan Domenech. He is the director of AASA, The School Superintendents Association. Superintendents are the leaders of school systems.

Philadelphia's schools show how disruptive the virus can be. Beginning in January the virus caused 114 city schools to go online. That resulted in a total of 920 days of online learning, more than any other school system in Burbio's data for January through June.

The district has changed hiring agencies and aims to fill 90 percent of substitute requests this year, said Orbanek. They also now have over 100 extra teachers. They are substitutes who show up at the same school every day in case teachers go absent at the last minute.

Schools cannot afford more disruptions when many kids have fallen behind from the pandemic, said Thomas Kane. He is an education researcher at Harvard University.

Students at schools in poor areas that were doing online learning for more than half a year lost equal to 22 weeks of learning, he said. Schools in wealthy neighborhoods lost only 13 weeks.

Schools are hopeful disruptions will be less likely. Many districts have invested in air flow systems. Vaccines are available to children as young as six months old. Some of the districts that were hit hardest last year have been employing more people and making small changes to their rules.

At Baltimore City schools, which is separate from the county school system, officials say there will be more access to rapid COVID tests.

In Columbus, Ohio, the school system saw 106 disruptions because of staff absences at the start of 2022. But the district did not point to any planned changes to its policies to prepare for possible increases in infections during the new year.

Lolita Augenstein is president of the Council of PTAs, or Parent Teacher Associations, in Columbus. She said she is hopeful that this year will be better. The district has hired more teachers and substitutes, she said. And educators are better trained to teach online if needed.

Augenstein said: "...kids are resilient. ... The families are trained in going back and forth between remote and the building."

disruption — n. to cause (something) to be unable to continue in the normal way

significant –adj. important enough to be noticed or to have an effect

absent — adj. to not be at a place

man –v. to place people at or on a place to do work

achievement gap — n. a long-term difference in the performance of two or more groups in education or some other field

access –n. the ability to get something or enter a place or group

resilient — adj. able to be strong, healthy or successful after something bad happens