Fewer Children Under the Age of Five are Dying

Update Required To play the media you will need to either update your browser to a recent version or update your Flash plugin.
By VOA
18 September, 2012

In recent years, the world has made progress in reducing deaths among children under the age of five. A new report says an estimated six-point-nine million children worldwide died before their fifth birthday. That compares to about twelve million in nineteen ninety.

The report says child mortality rates have fallen in all areas. It says the number of deaths is down by at least fifty percent in eastern, western and southeastern Asia. The number also fell in North Africa, Latin America and the Caribbean. 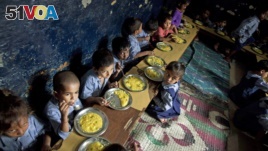 Children eat a meal at a school in a shanty neighborhood of New Delhi, India, Sept. 13, 2012.
The World Bank and three United Nations agencies worked together on the report. The three are the U.N. Children's Fund, the World Health Organization and the U.N. Population Division.

Ties Boerma is head of the WHO's Department of Health Statistics and Informatics. He says most child deaths happen in just a few areas.

TIES BOERMA: "Sub-Saharan Africa and southern Asia face the greatest challenges in child survival. More than eighty percent of child deaths in the world occur in these two regions. About half of child deaths occur in just five countries -- India, which actually takes twenty-four percent of the global total; Nigeria, eleven percent; the Democratic Republic of Congo, seven percent; Pakistan, five percent and China, four percent of under-five deaths in the world."

Ties Boerma notes that, in developed countries, one child in one hundred fifty-two dies before his or her fifth birthday. But south of the Sahara Desert, one out of nine children dies before the age of five. In Asia, the mortality rate is one in sixteen.

The report lists the top five causes of death among children under five worldwide. They are pneumonia, diarrhea, malaria and problems both before and during birth.

Tessa Wardlaw is with the U-N Children's Fund. She is pleased with the progress being made in Sub-Saharan Africa. The area has the highest under-five mortality rate in the world. But she says the rate of decline in child deaths has more than doubled in Africa.

TESSA WARDLAW: "We welcome the widespread progress in child survival, but we importantly want to stress that there's a lot of work that remains to be done. There's unfinished business and the fact is that today on average, around nineteen thousand children are still dying every day from largely preventable causes."

The World Health Organization says one way to solve these problems is to make sure health care services are available to women. In this way, medical problems can be avoided or treated when identified.

We have placed a link to the report on our website, 51voa.com.