Update Required To play the media you will need to either update your browser to a recent version or update your Flash plugin.
By VOA
04 September, 2015


Warming oceans will cause big changes in the biodiversity of sea life. That is a finding from the largest study ever of marine plants and animals. The study found that some sea creatures will expand into new areas. But other creatures, especially in warmer waters, are likely to die out.

The study was done at the University of Queensland in Australia. It examined nearly 13,000 plant and animal species across the Earth's oceans. Scientists used a model that looked at temperature changes at the sea surface. They then compared that information with what kind of climate and environment is best for the different marine species.

The study found that warmer ocean climates will suffer species loss. But creatures in colder climates will be able to survive by expanding their territory. That is not always a good thing, says John Pandolfi. He is with the ARC Centre of Excellence for Coral Reef Studies at Australia's University of Queensland. 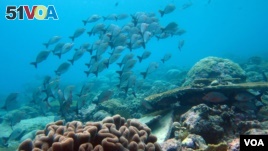 "So instead of having discrete differentiation of different marine communities in different places, we found in our analysis that projected climate change is going to result in a lot more mixing of species and a lot more sameness of diversity throughout the world's oceans."

The study lists these changes through the year 2100. Mr. Pandolfi says that sameness in the ocean is problematic, as researchers consider new ways to meet the food demands of a growing human population.

"It could be that species that were very abundant in the past and they are good at tracking environments, when they invade a new ecosystem or a new geographic region they are not the ‘top dogs' anymore or they may not be able to reproduce as effectively as they used to."

The study also looks at greenhouse gases – pollution linked to rising temperatures. Unless such gases are controlled, our planet and its oceans will continue to heat up, releasing the changes predicted in the study.

John Pandolfi warns the new combinations of marine species will present a major test for efforts to protect sea creatures.

"And that's something, I think, that it isn't easy for people to get their heads around, because, you think, ‘I'm going to set up a marine park here so I can make sure that these organisms are preserved through decades or centuries.' But in fact, with climate change, those communities are going to change. They are going to be dynamic. They are not going to be static entities."

In the warmer ocean climates, plant and animal species will cross into new territories.

Mr. Pandolfi says the study demonstrates the importance of cooperation among nations to fight climate change and the possible loss of biodiversity. The findings were published in the journal "Nature Climate Change."

biodiversity – n. the many different kinds of plants and animals in an area

marine – adj. relating to the water or the plants and animals that live in the sea

species – n. a group of life forms that are similar and can produce young plants or animals

ecosystem – n. everything that exists in an environment

geographic – adj. belonging to an area or country

top dog – idiom. the most important or powerful person in a group

static – adj. showing little or no change, action, or program