Update Required To play the media you will need to either update your browser to a recent version or update your Flash plugin.
By Christopher Jones-Cruise
30 March, 2016

Castro wrote a column in state-run media, saying, "We do not need the empire to give us any presents."

Castro is 89 years old. He turned over control of the communist island nation to his brother Raul in 2008. Raul is now 84.

Fidel Castro was not seen during Obama's recent three-day visit to Cuba. It was the first visit to that island nation by an American president still in office in almost 90 years. 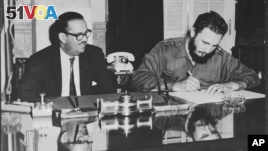 Cuban dictator Fidel Castro signs an order to take over all American-owned banks in Cuba, Sept. 17, 1960.

In Havana, Obama said more than 50 years of hostility between the countries had ended. He said "it is time now for us to leave the past behind."

But earlier this week, in a column called "Brother Obama," Castro wrote: "I imagine that any one of us ran the risk of having a heart attack on hearing these words from the president of the United States."

Castro wrote about exiled Cubans, or those who fled the island when Castro took power in 1959. A group of those exiles were trained by the U.S., returned to Cuba in 1961, and attempted to overthrow Castro. But the overthrow attempt – called the Bay of Pigs operation -- failed, deeply embarrassing President John F. Kennedy.

Cuba is 145 kilometers south of the United States. There is a U.S. naval base at Guantanamo Bay, Cuba. Terrorists suspected of acting against the U.S. are held there.

The two countries have reopened embassies in Washington and Havana, but a U.S. trade embargo remains in place. Obama has improved economic relations between the two countries.

Fidel Castro seemed angry about the renewed business relations. He wrote: "No one should pretend that the people of this noble and selfless country will renounce its glory and its rights. We are capable of producing the food and material wealth that we need with work and intelligence of our people."

Castro suggested that Obama not try "to develop theories about Cuban politics."

Presidential spokesman Josh Earnest said, "The fact that the former president felt compelled to respond so forcefully to the president's visit, I think, is an indication of the significant impact of President Obama's visit to Cuba."

column - n. a commentary or opinion piece in a newspaper

pretend - v. to act if something is true when it is untrue

compelled - v. forced to do something

respond - v. to say or write something in answer to something else