Update Required To play the media you will need to either update your browser to a recent version or update your Flash plugin.
By Anna Matteo
11 May, 2019

On today's program we talk about the word "field." But which one? There are many different kinds of fields.

First, we will talk about fields in which you can work.

A common question when you first meet someone in the States is, "What field do you work in?" or simply "What is your field?" Work fields are usually general. For example, if you are a doctor you would answer that you work in the medical field. A lawyer is in the legal field. And a marketing specialist's field is business. 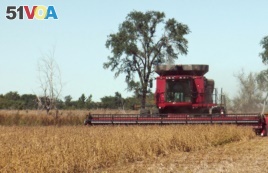 FILE - A farmer harvests a field of soybeans in the U.S. state of South Dakota.

If you are a farmer, you might work in another kind of field --an area of open land planted with crops. Some farmers work in the fields from sunup to sundown.

Now, another kind of field is also outside but we use this one for sports activities. And this type of field has led to several common expressions.

Fair play is an issue in most sports. No one wants to watch or play a game in which one team has an unfair advantage over another. Everyone wants a level playing field -- but not just in sports.

We use this expression anytime fairness is important. A level playing field is when the conditions of competition are fair or even. Everyone has the same shot at winning.

This expression comes from the fact that for a sports field to be fair, it must be the same for both teams. It would be unfair if one team had to play on a rocky, uneven part of a field while the other team played on smooth ground.

In "level playing field," the word "level" is an adjective. But we can also use it as a verb. So, if you level the playing field, you have done a good thing! You have given everyone equal conditions for success.

Now, let's go back to sports, in particular baseball.

When playing baseball, the infielders and outfielders are the ones who field the balls. They catch the balls hit or thrown in the field and then make the best play they can. So, we can say they are playing in the field.

However, they are not playing the field. That is something completely different!

Playing the field has nothing to do with sports. We use it mostly to talk about dating. Someone who plays the field is romantically involved with more than one person.

The expression comes from horse racing.

The horses in a race are "the field." And in that field of horses there are the favorites-- those considered most likely to win. And there are long shots -- those less likely to win. Long shots are riskier to bet on, but they pay more money if they win. So gamblers often bet on other horses other than the favorite. They would play the field -- or several horses in the race.

Word experts dispute its exact origin. One possibility comes from how a baseball player scores. A runner on third base -- in position to score at home plate -- has his back to left field. As he runs home to score, he cannot see the ball thrown into home base by the left fielder. And then -- surprise! -- he's out at home plate!

I hope you have enjoyed today's show on field expressions. And, believe me, there are others. We could have a field day with the subject!

But, that will have to be another day!

general – adj. relating to the main or major parts of something rather than the details : not specific

romantically – adv. in a way that involves love between two people

odd – adj. strange or unusual : different from what is normal or expected