Update Required To play the media you will need to either update your browser to a recent version or update your Flash plugin.
By Dan Friedell
30 June, 2017


Cristoph Kramer is a football player from Germany.

Just weeks after playing his first match for the national team, he was added to the list of players for international football's 2014 World Cup. In the United States, the sport is called soccer.

Christoph Kramer left for Brazil, not expecting to play much in the World Cup. But when a German teammate was injured before the final against Argentina, Kramer found himself in the starting lineup. He was given a chance to compete in the championship match.

In the first half, Kramer was hit hard in the head by the shoulder of an Argentinean player while they both went for the ball.

Kramer fell to the ground, hard.

He was clearly injured. But he stayed in the game because he could still walk, and was not bleeding. 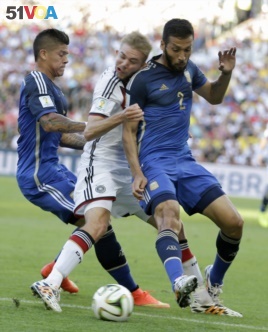 Germany's Christoph Kramer gets hit in the face by Argentina's Ezequiel Garay shoulder (2) while pinned between Garay and Marcos Rojo during the World Cup final soccer match.

Finally, after playing 13 minutes without understanding what game this was or where he was playing, Kramer was replaced. He went to the sidelines while another German player took the field.

Germany went on to win the game and the World Cup title.

Later that year, in an appearance on a German television show, Kramer and his teammates joked about what happened.

But he had suffered a serious head injury. It was not a joke.

A new report accuses FIFA, football's governing body, of not taking head injuries seriously. The article was published in The Journal of the American Medical Association.

The article said 61 players had at least one head collision in the 64 matches of the 2014 World Cup. There were 81 total collisions. Only 12 times did players who might have suffered a head injury get a proper examination.

The head injury Kramer suffered is called a concussion. It happens when the brain hits the skull, the bone inside the head.

A concussion is hard for trained medical specialists to confirm. It is an internal injury and, most of the time, a football player can stay on his feet.

But the article argues that when a player looks like he may have suffered a concussion, doctors should take a close look at him right away, for at least seven minutes.

People who have concussions are slow to get up. They often do not know where they are, hold their head in their hands and have trouble keeping their balance.

Michael Cusimano works as a neurosurgeon at St. Michael's Hospital in Toronto, Canada. Cusimano is an expert on the central nervous system, including the brain. He helped to prepare the journal article. 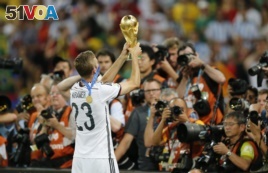 Christoph Kramer of Germany celebrates the World Cup title with fans in 2014. He missed most of the game due to a concussion.

In the 2014 World Cup, Cusimano said, there were only two collisions where he could be "happy and confident" that the players were getting good care.

That finding goes against the Consensus Statement on Concussion in Sport, which FIFA signed. The statement says any player showing signs of a concussion should leave the game and be examined right away. That did not happen.

Cusimano wondered why team coaches and trainers will remove a player who hurts his knee but not his head.

FIFA officials did not speak with VOA about the report. But the organization noted a recent rule change that permits stoppage of play for up to three minutes so an injured player can be examined.

But Cusimano says three minutes is not enough. Sometimes it takes longer to be sure a player is in good health.

He also wants to be sure an independent doctor looks at the players. Team doctors can feel pressure to send an injured player back into the game.

Some people say football organizations must make another rule change: teams should be able to use a replacement player while doctors attend to the injured.

A FIFA spokesman said protecting the health of players "is a top priority in developing the game."

Cusimano said he and the other researchers chose the World Cup for their study because so many people watch the games. They felt that if FIFA makes a change for football's championship, other sports organizations will follow.

"The whole world is watching," Cusimano said. "FIFA has all the ability to do this properly."

Ben Thompson wrote this story for VOANews. Dan Friedell adapted his report for Learning English. George Grow was the editor.

Do you think FIFA does enough for players who might have head injuries? We want to know. Write to us in the Comments Section or on 51VOA.COM.

match – n. a contest between two or more players or teams

internal – adj. existing or occurring within your body

consensus – n. a general agreement about something : an idea or opinion that is shared by all the people in a group

properly – adv. in a way that is acceptable or suitable