Update Required To play the media you will need to either update your browser to a recent version or update your Flash plugin.
By Dan Friedell
10 January, 2017

Sports lovers around the world are reacting to the latest news about football -- a game called soccer in the United States. 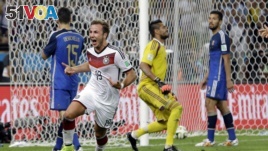 Germany's Mario Goetze celebrates after scoring on Argentina goalkeeper Sergio Romero during the World Cup final soccer match at the Maracana Stadium in Rio de Janeiro, Brazil, July 13, 2014. If Germany wins again in 2026, it will be the best among 48 teams.

All voting members supported the plan as a way to raise more money for the organization and add excitement to the event.

The 2026 World Cup tournament will involve 48 nations. It will also have 80 games, 16 more than in the past. But the eventual winner will still only play seven games.

The extra games should result in about $1 billion in additional money for FIFA. That money will come from sponsorships, advertising and deals with broadcasters.

Countries in Africa and Asia should receive the majority of the new tournament berths. By May, regional governing organizations will know how many new positions they have been awarded.

The newly approved plan will include other changes, too. For example, there will be 16 groups of three teams. The top two teams in each group will earn rights to compete in a 32-team elimination round. Penalty shootouts may be used as tie-breakers in the group games.

Some countries think the World Cup will not be as good as in past years because of the increased number of teams. But FIFA officials said they used a computer program to predict the results of 10,000 tournaments. It found that the quality of the event was always decided by the best 32 teams.

The announcement is getting mixed reaction.

Some football fans and sports lovers say the World Cup was fine the way it was.

One writer already predicted the 16 groups based on the current FIFA ratings. The list includes countries like Curacao, Burkina Faso and Uzbekistan. These countries have never qualified.

Other fans celebrated the news. They say their country's team will now have a better chance of getting into the tournament.

In other news, FIFA announced the 2016 winners of its 2016 Best Player of the Year award. Real Madrid and Portugal star Cristiano Ronaldo won the m'n¡s award. The wom'n¡s prize went to Carli Lloyd of the United States.

What do you think of FIFA news? We want to know. Write to us in the Comments Section or on 51VOA.COM.