FIFA: ‘Most Important Project’ Is Not World Cup

Update Required To play the media you will need to either update your browser to a recent version or update your Flash plugin.
By Dan Friedell
03 November 2022


This year's soccer World Cup in Qatar begins on November 20. But the international tournament is not FIFA's "most important project."

The world soccer organization says its top project is called Football for Schools.

The plan is to provide soccer balls to schools around the world so 700 million children can learn about the game. The organization wants to give away 11 million balls and provide a mobile phone program, or app, so adults can teach children how to play. 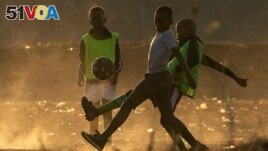 Children play soccer in June 2021 in the dirt east of Johannesburg in South Africa. FIFA says its Football for Schools program is more important for the game of soccer than the upcoming World Cup. (AP)

Fatimata Sow Sidibe heads the project for FIFA. The goal is to reach half the children in the world aged four to 14.

The program started in 2019 but was delayed because of the COVID-19 pandemic. It started again this year with a budget of $100 million.

That amount is about one percent of what Qatar spent building stadiums.

Steve Pila is running the project in South Africa. He called it "the most important project in the world of football." Football is another word for soccer.

Pila said the other part of the project – the coaching app for smart phones – is important. Many schools do not have a person trained in coaching soccer.

"Even a teacher in the most rural area is able to take young boys and girls together, and at the palm of your hand, you have something to do with them," he said.

Pila said the largest problem for soccer in South Africa is that there are not enough good coaches. The app "fills the gap just a little."

The 2026 World Cup will be co-hosted by the U.S., Canada and Mexico and it is unlikely that the Football for Schools program will find the next big world star by then. Player development, especially among such young children, takes time.

Sow Sidibe said it is hard to find investors in a project like this because it takes too long to see results.

However, research shows that the best players in the world all had regular experience playing soccer before they turned 10. Lionel Messi played for a team in Argentina starting at the age of four. Cristiano Ronaldo played regularly by the time he was seven.

FIFA said there are more than 500 million children in the world who do not play soccer very often.

Mzimkhulu Fina is with the South African Football Association. He said: "We are spreading the net now."

Football for Schools is centering its work on children in poor countries. It is already working in 18 countries and plans to start on the Caribbean Sea area next. In 2023 it will move to India where it hopes to reach 1.8 million children. Soccer officials want the program to move into all 211 countries that are members of FIFA.

Africa faces many difficulties. But 400 million children under the age of 10 live there and soccer is the top sport.

Pila said many children who are interested in a soccer career must leave their homes. He gave an example of Sadio Mane of Senegal who plays for Bayern Munich in Germany. He is one of the world's best players, but he grew up in Bambali in southern Senegal. He had to leave for Dakar when he was a teenager so he could be discovered.

Pila said many other young people do this, but unlike Mane, "so many are missed."

Yaya Toure of Ivory Coast went on to play for Barcelona in Spain and Manchester City in Britain. He said there are good players in Africa, "but if they are not surrounded by all they need to be among the top ... it's going to be difficult."

Pila said there is one more part of the Football for Schools program. Inside the app is a part about life skills. It tells young players that they will need more than their soccer skills to have a good life. The program is designed by UNESCO, the United Nations' education agency. UNESCO believes putting more soccer programs in schools will keep young students interested in attending class longer.

"You know football is not long-lived," Pila said. "You play it as long as you are under 35. Unless you are Cristiano Ronaldo."

tournament –n. a sports competition or series of contests that involves many players and teams and continues for several days

stadium –n. a large building, usually without a top, in which sports are played on a field surrounded by seating

app (application) –n. a computer program that carries out a special task

gap –n. an area where something is missing