Update Required To play the media you will need to either update your browser to a recent version or update your Flash plugin.
By Anne Ball
02 June, 2015


Four days after his election to a fifth term as FIFA president, Sepp Blatter has resigned. The head of the soccer organization made the surprise announcement on Tuesday as charges of corruption against FIFA continued to grow.

Mr. Blatter was re-elected last week in Zurich, Switzerland. That was two days after the U.S. Justice Department had brought corruption charges against 14 people connected to FIFA. The U.S. says FIFA was running a criminal organization that involved more than $150 million in bribes. And Swiss officials said they are investigating how FIFA awarded the 2018 World Cup to Russia and the 2022 event to Qatar.

Since the election new developments have surfaced. 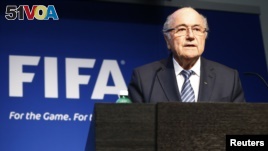 The head of the South African soccer organization admitted Sunday that FIFA had made a $10 million payment in 2008 to the Confederation of North, Central American and Caribbean Association Football. But he said it was not a bribe. Two years after that payment, South Africa hosted the 2010 World Cup, the first finals ever held in Africa.

On Monday, news organizations, including The New York Times and the Guardian, reported that FIFA Secretary General Jerome Valcke had approved the payment. Mr. Valcke is the second-ranked official in FIFA under Mr. Blatter.

U.S. officials say former FIFA vice-president Jack Warner took the $10 million payment from South Africa for personal use. Mr. Warner spoke to reporters after his release from jail. He had this to say, "No one has brought more shame to FIFA than Blatter himself."

The 79-year-old Mr. Blatter spoke at a news conference about his decision to step down. He said, "FIFA needs a profound restructuring." Mr. Blatter said he will continue to keep his job as president until the election for a new president.

Just days earlier, in the same room, Mr. Blatter had been defiant when questioned about FIFA's problems, and the possibility that he, too, could be arrested.

The new elections will take place sometime between December and March.

Some observers said it was just a matter of time before President Blatter would be forced to step down. That is because of the serious charges against some of the people who served directly below him in FIFA.

Chris Eaton is Executive Director of Sport Integrity at the International Centre for Sport Security in Doha, Qatar. He told VOA Mr. Blatter resigned because there was something hanging over him.

"It's clear to me that this resignation would not be made in the absence of something that has significantly occurred, since his re-election recently. So there is something, I'm sure, that will come out in the fullness of time about why he's resigned."

But before his resignation, Mr. Blatter was also getting support. One of the greatest soccer players the sport has ever seen, Pele, had expressed his support of Sepp Blatter. He said he had been in favor of his re-election. Pele, who helped Brazil win three World Cups, said it was better to have someone with experience.

However, business sponsors had said they were reviewing their support of FIFA after the corruption charges. They include Visa, Budweiser, Adidas, McDonald's and Coca-Cola.

Chris Eaton had strong words about the way FIFA has operated. He called FIFA a "private club operating a sport monopoly." Then, Mr. Eaton said, "it's time for them to grow up."

Anne Ball wrote this story for Learning English. Hai Do was the editor.

bribe –n. something valuable (such as money) that is given in order to get someone to do something

defiant- adj. refuse to obey someone or something