Update Required To play the media you will need to either update your browser to a recent version or update your Flash plugin.
By Dan Friedell
21 November 2022


The soccer organizations of seven European countries said their team captains will not wear a colorful armband at the soccer World Cup in Qatar. A captain is a player who leads the team on the field.

The team leaders from England, Wales, Belgium, the Netherlands, Switzerland, Germany and Denmark had planned to wear the ‘OneLove' armbands on the field. The armband was to show support for diversity and inclusion.

But on Sunday, before the first European team was to play, soccer governing body FIFA said players who wore the ‘OneLove' armband would be punished with a yellow card. 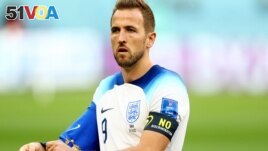 England's Harry Kane wears a FIFA-provided No Discrimination armband before the match against Iran in the World Cup Qatar 2022 on November 21, 2022. (REUTERS/Hannah Mckay)

A yellow card is usually given to players who break rules or make illegal plays. If players get two yellow cards, they are forced out of the game.

The captains and their national organizations said it was too risky to start their most important games in many years with a yellow card. In a statement sent Monday, the European countries said their players would not wear the armbands. They said, "FIFA has been very clear that it will impose sporting sanctions if our captains wear the armbands on the field of play."

Harry Kane is the captain for England. He said on Sunday that he wanted to wear the armband. But when the game against Iran began on Monday, he was not wearing it.

The Netherlands played Senegal on Monday and the country's soccer organization said it gave up the plan because "you don't want the captain to start the match with a yellow card."

The move was criticized by groups representing the LGBT community. LGBT is the shortened form of lesbian, gay, bisexual, and transgender.

3LionsPride, a group of England fans, said the captain's "basic rights to freedom of speech and expression are being crushed by FIFA." And England's Football Supporters' Association added: "Today we feel contempt for an organization that has shown its true values by giving the yellow card to players and the red card to tolerance."

The human rights group Amnesty International said "FIFA should be leading, not cracking down on" issues such as diversity and inclusion.

No response from FIFA

The statement from the European teams said they were "very frustrated" by the FIFA decision. It came days after FIFA president Gianni Infantino said "... I feel gay" while defending the decision to hold the World Cup in Qatar. It is a country where homosexuality remains illegal.

They said they wrote to FIFA in September to tell of its plan "to actively support inclusion in football, and had no response." The group added that "our players and coaches are disappointed – they are strong supporters of inclusion and will show support in other ways."

For the World Cup, FIFA started its own armband plan to support different causes. After the decision on Sunday, FIFA said it would move its "no discrimination" armband plan up so all 32 captains would be able to wear it. FIFA said in a statement that under its rules, "the captain of each team must wear the captain's armband provided by FIFA."

Stan Collymore is a former player for the England team. He said Kane should wear the original armband and take the yellow card. "It's about more than football," he wrote on Twitter.

diversity –n. the quality of having many different people, races or cultures in a group or organization

inclusion –n. the act of making someone part of something

sanction –n. a punishment or restriction placed on one group

tolerance –n. the idea of being accepting of ideas or people different from your own

crack down –v. to punish or restrict something

homosexuality –n. the state of being romantically attracted to someone of the same sex

coach–n. the leader or manager of a sports team