Update Required To play the media you will need to either update your browser to a recent version or update your Flash plugin.
By Phil Dierking
30 March, 2018

The reported abuse took place Tuesday during a match in St. Petersburg between the French and Russian national teams. During the game, people in the crowd reportedly yelled a racist term repeatedly at black players from France. The yelling was captured by television cameras. It reportedly can be heard clearly after Paul Pogba scored France's second goal.

France won the match three to one. 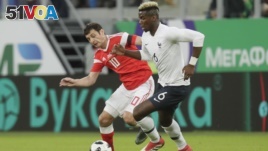 FIFA said on Wednesday that it was collecting evidence and would contact the anti-discrimination organization Fare Network. The group helps FIFA investigate reports of racism.

A FIFA statement said the group is collecting evidence connected to the incident. FIFA said it could not comment further until it had considered all the evidence.

"Racism has no place on the soccer field," she wrote. "We should act together at a European and international level in order to stop this intolerable behavior."

Fare Network said the incident in St. Petersburg shows the weaknesses in Russia's preparations for the World Cup.

"If photographers heard it pitch-side, then there must have been stewards and other officials who also heard it," he said

He said it will be a bad sign for the World Cup if officials do not have a plan by the end of this month to deal with racist fan behavior.

He said, "So close to the World Cup, questions are being asked...to why it wasn't dealt with as it occurred during play."

This latest incident of reported racism is the third this season at St. Petersburg Stadium, which is to hold a World Cup semifinal match. The other two cases involve the city's local team, Zenit. The United European Football Association begins to hear one of those cases May 31. The World Cup is to start two weeks later.

This story was originally written by Dmitri Lovetsky and Jamesv Ellingworth for the Associated Press. Phil Dierking adapted this story for VOA Learning English. Caty Weaver was the editor.

How do you think sports leagues can control racist fans? We want to hear from you. Write to us in the Comments Section or on 51VOA.COM.

intolerable - adj. too bad, harsh, or severe to be accepted

match - n. a a contest between two or more players or teams

pitch - n. (chiefly British) an area that is used for playing sports; a playing field

steward - n. (chiefly British) someone who is in charge of a race, contest, or other public event