Update Required To play the media you will need to either update your browser to a recent version or update your Flash plugin.
By VOA
20 February, 2015


The movie "Fifty Shades of Grey" opened last week and sold more than $300 million worth of tickets worldwide. That is more than seven times the amount it cost to make the film.

A sequel seems probable. However, the writer of the book it is based on reportedly wants more creative power in the making of a sequel.

The industry newspaper Variety says E. L. James plans to write her own script for "50 Shades Darker." But Universal Pictures is "resistant" to the idea. The studio has not even officially announced that it is making a sequel. It is holding discussions. 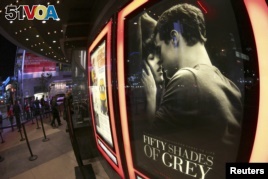 A film poster for "Fifty Shades of Grey" is pictured at Regal Theater in Los Angeles, California, Feb. 12, 2015.

The movie has not done nearly as well with the critics. Several movie critics called the film "boring" and "tedious." A USA Today newspaper review said watching it "may feel like its own form of torture."

The little praise the movie did receive is directed mainly toward actor Dakota Johnson, who plays Anastasia Steele, a sexually innocent college student. Jamie Dornan plays Christian Grey, a young, rich and powerful businessman who becomes Anastasia's lover. The movie is an exploration of their sexual relationship that includes control and bondage.

Both the book and movie versions of "Fifty Shades of Grey" found larger audiences among women than men. Of course, some men are seeing the movie, although not without risk. A Danish reporter caught one man on camera walking out of the room where "Fifty Shades" had just ended. As soon as he saw the camera he smiled sheepishly and turned around, walking back into the theater. That video has gone viral on the Internet.

American football player Russell Wilson also got some unwanted attention after seeing the movie. The Seattle Seahawks quarterback tweeted "great movie," after the show. Many of his Twitter followers responded with displeasure. Some said that the movie is immoral and that Wilson was not demonstrating Christian values.