Update Required To play the media you will need to either update your browser to a recent version or update your Flash plugin.
By Anne Ball
30 June, 2019


Fifty years after American men landed on the moon, there is still money to be made from the event.

Hundreds of millions of people watched on television on July 20, 1969, when American astronaut Neil Armstrong became the first human to step on the moon. Back then, businesses sold many products connected to the event – from cars and televisions to food and drinks.

Many such products are now available again -- in celebration of the moon landing's 50th anniversary. 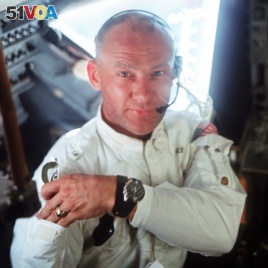 FILE: Edwin "Buzz" Aldrin in the Apollo 11 Lunar Module. Omega issued a limited edition Speedmaster watch, a tribute to the one that Aldrin wore to the moon 50 years ago..

A limited number of Omega's Speedmaster watch – the same brand that Buzz Aldrin wore on the moon – will be sold. They will be available for purchase for an out-of-this world cost: $34,600.

Omega Speedmaster watches have been an important part of space travel since NASA chose them for its manned missions in 1965. Other watches had failed required tests.

Omega's gold Speedmaster is a version of the watches the company gave to astronauts at a celebration dinner in 1969. A less costly stainless steel one sells for $9,650. That version will show an image of Aldrin stepping down from the moon lander.

A more down-to-earth product is Budweiser's Discovery Reserve. The American beer company is bringing back a recipe from the 1960s. The packaging includes 11 stars to represent Apollo 11.

Something for children – as well as adults—is the NASA Apollo 11 moon lander set. Made by Lego, it is a group of small pieces to put together to make a model of the moon lander.

Other things for sale include shirts with the Neil Armstrong expression "one small step" on them. He spoke those words as he placed his foot on the moon. There are also socks with the huge Saturn V rockets on them.

Then, there are the anti-gravity Fisher Space Pens, developed just for the Apollo missions. They work even when writing upside down. Now Fisher Space Pen Co. has a $700 limited-edition pen for sale, with real materials from the Apollo 11 spacecraft.

Back in 1969, companies Omega and Fisher Space Pen Co. were quick to show their Apollo 11 connections with media and advertising campaigns. Other companies doing business with NASA -- like Boeing and General Electric -- did the same.

The food company Stouffer's made sure consumers knew it provided food for Apollo 11 astronauts once they returned to Earth. It launched the ad campaign "Everybody who's been to the moon is eating Stouffer's." Fifty years later, the company is celebrating with a media campaign to share some recipes from 1969.

NASA ended its Apollo program in 1972. In the years since, no single event has captured the world's excitement in the same way that Apollo 11 did.

David Meerman Scott is a marketing expert and co-writer of the book "Marketing the Moon." The book details the media relations effort that went into the Apollo 11 mission.

Scott said the 50th anniversary comes at a time of renewed interest; NASA has plans to send astronauts back to the moon by 2024 and to Mars in the 2030s.

Marketing efforts for a NASA Mars mission are already in development. Lego is releasing six new Lego City Mars exploration sets. And Budweiser has declared it wants to be the first beer on Mars.

Alexandra Olson wrote this story for the Associated Press. Anne Ball adapted the story for VOA Learning English. Ashley Thompson was the editor.

out-of-this-world - phrase. something you cannot reach

packaging - n. material used to enclose or contain something

shirt - n. a piece of clothing for the upper body that has sleeves and usually a collar and buttons down the front

sock - n. a piece of clothing that is worn on your foot and that covers your ankle and sometimes the lower part of your leg

limited edition - n. a special book, picture, medal, or item, for which only a small number of copies are produced and sold