Update Required To play the media you will need to either update your browser to a recent version or update your Flash plugin.
By VOA
27 August, 2015


President Barack Obama remains focused on the fight against climate change even as he fights to win support for the Iran nuclear agreement. For many years, he has called climate change the greatest threat to national security.

At the National Clean Energy Summit earlier this week, the president talked about the growth in solar energy use. Mr. Obama noted that businesses and home owners in the United States now generate 20 times more electricity from the sun as they did in 2008.

He says the world's largest group of solar panels began converting energy from the sun into electricity last year. It has nine million panels. It generates enough electricity for more than 100,000 homes. He said that clean, renewable energy is being generated, in his words, "not in Germany, not in China, not in Saudi Arabia -- right here in the United States of America."

At the meeting in Las Vegas, the president announced plans to lower the cost of renewable energy sources, including solar. 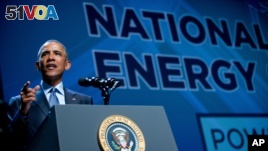 Earlier this summer, he announced a plan to cut carbon emissions from coal-fired power centers. His political opponents in the Republican Party -- and supporters of coal, oil and gas -- say the plan will hurt the economy.

Next week, Mr. Obama will travel to the Arctic area of Alaska. He will be the first president to do so. He will talk about the effects of global warming.

Benton Strong is an associate director of the Center for American Progress, a liberal research group.

He says some people who live in villages in the Arctic are, in his words, "seeing their villages melt into the ocean." Mr. Strong notes that the president will be going to the place where there are more areas of wildfire damage than any other place in the country. He says the president will be able to see for himself the effects of climate change.

Mr. Strong notes the president has reached agreements with the leaders of China and India on fighting climate change. He says 30, 40 or 50 years from now people will say that the most important part of the Obama presidency was making plans to deal with climate change.

Geoff Mirkin started a company in Maryland six years ago to place solar panels on homes and buildings. It began with three employees. There are now more than 50.

He questions why there is opposition to government plans to increase the amount of renewable energy the country uses. He notes oil, gas and coal producers have been getting help from the government for many years. He says solar power has been forced into the country's political wars. He says he is a Republican, but he believes in solar power because it helps people save money on electricity and helps the environment.

I have children, he says, and I care about their future.

emissions – n. something sent out or given off

Does your country have a plan to increase the use renewable energy? We want to hear from you. Write your thoughts in the comments section.