Update Required To play the media you will need to either update your browser to a recent version or update your Flash plugin.
By Ashley Thompson
31 January 2020


Ash that came from a Philippine volcano has become painting material for artist Janina Sanico.

Sanico is 24 years old. She lives in a town near the Taal volcano in the western part of the Philippines. The volcano erupted on January 12, releasing huge amounts of ash, steam and rocks. By the next day, ash blew as far away as Manila, about 100 kilometers from the volcano. Ash clouds continued to come out of Taal for many days. 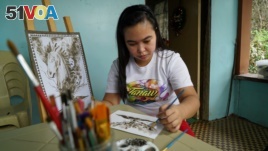 Sanico's backyard plants became covered in ash. She began mixing the ash with water and a sticky substance to create watercolor paint. She then used the mixture to paint images of the destruction that the small but dangerous volcano caused. Some of her paintings were of the volcano itself. Others were of animals that suffrered after the eruption. One of her paintings is called "Animal Tears."

Sanico said, "I was very moved by what happened in the aftermath. The animals affected. They have no way to save themselves. So that was the pain I felt."

Sanico describes herself as a "natural watercolor painter." This means she tries to use things from nature to create the colors that she paints with. She is especially known for using coffee in her watercolors.

She said she was surprised that the ash worked as well as it did, as long as she added enough water.

Hundreds of thousands of people were forced to leave their homes after Taal erupted. Sanico said she has been selling her volcanic ash paintings and donating the money to help those who have been displaced.

On January 26, Philippine officials lowered the danger level for Taal volcano after two weeks on high alert. The move permits many of the area's displaced villagers to return home.

erupt –v. to send out rocks, ash, lava, etc., in a sudden explosion

backyard –n. an area in back of a house

aftermath –n. the period of time after a bad and usually destructive event — usually singular

inspiration –n. something that makes someone want to do something or that gives someone an idea about what to do or create : a force or influence that inspires someone

displace –v. to force (people or animals) to leave the area where they live

alert –n. the state of being ready for something you have been warned about (such as an attack)