Update Required To play the media you will need to either update your browser to a recent version or update your Flash plugin.
By Jonathan Evans
14 April, 2019


British hospitals are in serious need of more nurses like Filipino Jobie Escalona. But she has twice failed a required English language test. In the test, she was asked to write about the value of immigration and computer education in school.

The 23-year-old Escalona paid nearly $600 to take the tests.

She was ready to leave Britain and find work in Canada, one of several other countries short of nurses. But her father persuaded her to take the test a third time.

Finally, in January of last year, she passed the International English Language Test System, or IELTS. She felt at ease writing about the subject given in the test: comparing team and individual sports.

Escalona told Reuters, "I was able to relate to it because I am a swimmer."

A British government report says Filipinos make up the largest number of foreign nationals employed in Britain at 10,719.

As of June last year, foreigners held 16 percent of nursing jobs in hospitals and community health services there. Nearly 25 percent of those foreigners were Filipinos.

Britain is already facing a shortage of 40,000 nurses. Experts predict that number could increase to 50,000 if Britain leaves the EU.

The lack of nurses is increasing Britain's dependence on low-pay workers from countries like India and the Philippines. English is widely spoken in those countries, but the language test has proved to be a major difficulty.

It has only filled about 250 of them. 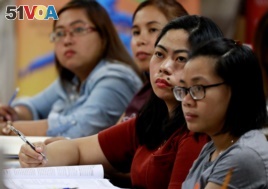 Filipino workers, including nurses applying to work in United Kingdom, attend a lecture at a review center for the International English Language Testing System or IELTS in Manila, Philippines, April 2, 2019.

Lilibeth Villas is a documentation officer at the business. She said the English test is the problem. She said, the company has job seekers "who were interviewed in 2015, but they have not passed the test yet."

The IELTS is a product of the organizations The British Council and Cambridge Assessment, along with the international company IDP Education. The IELTS measures test takers' abilities to speak, listen, read and write in English. Employers around the world use the test to help them make hiring decisions.

The writing part of the IELTS requires test-takers to write short pieces on different subjects. One such subject might be the benefits and weaknesses of nuclear technology or of laws about car ownership.

Late last year, the requirements for passing the writing section were decreased. But Andrea Sutcliffe says there are no immediate plans to make further changes to the test. Sutcliffe is head of Britain's Nursing and Midwifery Council.

She said, "This change is part of a wider review of our overseas registration processes aimed at making it more straightforward and user-friendly for people with the right skills and knowledge to join our register in a timely way."

Foreign nurses can take an Occupational English Test (OET). If they pass that test, they would still have to take the IELTS, but the marks needed to pass would be lowered. The OET is more costly, however.

Reydeluz Conferido is a recent former diplomat with the Philippines Embassy in London.

While there, Conferido called on British officials to review the requirements placed on overseas nurses to see whether they were serving the correct purpose.

He said, "If you really want these nurses, you would do something about your standard."

Karen Lema reported this story for the Reuters news service. Jonathan Evans adapted it for Learning English. Caty Weaver was the editor.

interview – v. to question or talk with someone in order to get information or learn about that person

persuade – v. to cause someone to do something by asking, arguing, or giving reasons

recruitment – n. the act of finding suitable people and getting them to join a company, an organization, the armed forces, etc.